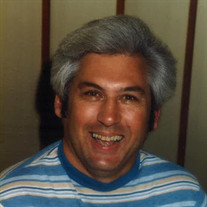 Richard Gorman, age 78, died on February 16, 2021 at Pleasanton Nursing & Rehabilitation Center. He was born on December 22, 1942 to Frank and Helen Gorman in Oakland, California. On November 13, 1977, he married his wife of 32 years, Cherie Ravazza, who preceded him in death. Together they had two sons, Jason (39) and Jeff (32). Richard loved baseball but wasn't allowed to play high school sports at Oakland Tech due to the fact that at the age of 16 he was already a professional bowler therefore forgoing his amateur status. Richard served his country in Korea from 1960 to 1962. After returning home he purchased a home for his parents with the help of the GI bill. Richard then began work as a truck driver for TransCon and Sealand. Eventually finding his long-term career with Union Pacific Railroad at the port of Oakland. He became the union shop steward to the Teamsters local 70 and fought hard in labor negotiations for fair wages and benefits, to protect the rights of his fellow co-workers and their families. This was a position he was very proud of and held until retirement. In his younger days, Richard was an avid fisherman and outdoorsmen, and in his years of retirement, he took up a love for gardening. He and his wife loved to travel with their family, particularly on cruises. Over their 32 years of marriage they went on sixteen cruises mainly in the Caribbean and Alaska. Richard adored time with family and friends. Richard was a devoted son to his loving mother Helen. In her later years taking care of her, including forcing a doctor to perform surgery to save her life at the age of 87, Helen lived another 5 years. Among his many interests, Richard had a deep love of sports which was instilled by his father and he later passed on to his sons. He devoted much of his time outside of work to coaching his sons on their baseball teams and helping them practice and improve. Richard also volunteered his time as a baseball umpire. Eventually introducing both his sons to umpiring and the three of them having a combined 60 years of umpire experience, both amateur and professional. He also loved watching football and for 25 years, hosted legendary Super Bowl parties, no matter who was playing. And was able to see the last Super Bowl played before his death. He was truly an unforgettable person with a dynamic personality and big incredible hair. Even in his later years people would stop him on the street and comment on his hair. Throughout his long life learning nicknames such as “Diamond Dick” “The Silver Fox”, as well as "Pb" from his son's. He gave out nicknames himself and enjoyed joking and playing practical jokes on those in his life. A man known for his honesty and generosity, he provided for his parents, wife and children with a selfless love, and he will be greatly missed. His sons were with him when he passed.

Richard Gorman, age 78, died on February 16, 2021 at Pleasanton Nursing & Rehabilitation Center. He was born on December 22, 1942 to Frank and Helen Gorman in Oakland, California. On November 13, 1977, he married his wife of 32 years, Cherie... View Obituary & Service Information

The family of Richard Gorman created this Life Tributes page to make it easy to share your memories.

Send flowers to the Gorman family.