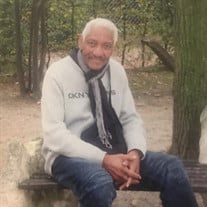 Willie Herman Hamilton, Jr. was born On October 20, 1938 in Warrenton, Georgia to Willie Herman Hamilton, Sr. & Beatrice Johnson who were both sharecroppers. Although born in Warrenton, Willie grew up in Savannah Georgia where he attended public school. Willie was a very bright young man, and as a result of his brightness, he graduated High School at the age of 16. After graduating from high school, Willie enrolled at Savannah State University College in 1955 where he later received his Bachelor of Science Degree in Chemistry. In The Fall Semester of his Sophomore year Willie became a member of Alpha Phi Alpha Fraternity, Inc. Delta Eta Chapter. After graduating from Savannah State University, he got a job teaching Chemistry at Liberty County High School In McIntosh Georgia. While teaching chemistry at Liberty County High School, Willie enrolled at Tuskegee Institute to work on A Degree in Science Education with an emphasis in Chemistry. In 1967 after completing his second Masters in Biochemistry, Willie headed to Sunny California and entered The Doctoral Program at The University of California’s Botany Department of Plant Physiology and Histochemistry. Shortly After arriving in California, Willie said he began to go by Bill to avoid certain stereotypes, which he felt at that time could potentially affect his teaching career. In 1970 Bill began working for the Berkeley Unified School District as A Science Teacher and Coordinator of The Gifted and Talented Education Program. (G.A.T.E.) In 1979 Bill began his remarkable career in The Oakland Unified School District. Still fulfilling his goals, he received his Administrative Services Credential from UC Berkeley in 1982 and entered The University’s Ph.D Program in Administration and Supervision. He became The Principal of Elmhurst Middle School in 1987 and then became Principal at Webster Academy a few years later. In 1995 he became The Principal of McClymond’s High School where he was greatly responsible for the upliftment of morale and a change in Culture before retiring in 1999. Bill received a plethora of awards during his illustrious teaching career including Teacher of The Year in 1983. In 1972 while teaching in The Berkeley Unified School District, Bill met Joyce Ann Sutton who also worked for The Berkeley Unified School District. They began dating and the rest is History. Bill & Joyce lived a remarkable 50 year life together, full of Love, incredible friends, companionship, entertainment, and Traveling The World together. Their House was always the place to be, where you always felt at home. There was always nice music, good drinks, & the best food imaginable. They were both great Cooks, loved to entertain, and they both could really dance. Bill, or Willie as he was known to Family Members, will be missed tremendously because of his kind nature, loving spirit, & positive energy that exuded from his person. This man touched so many people, old and young, both directly and indirectly Willie (Bill) will be survived by his Wife Joyce Sutton-Hamilton (Oakland) Son Herb Smith III (Atlanta) Grandson Jared Anthony Smith (Atlanta), GrandDaughter Errin Smith (Atlanta) Great GrandDaughters, Alayah & Giselle Dior, (Atlanta) Brother James Hamilton (Las Vegas), Nieces Patricia Hamilton (Atlanta), Sandra Hamilton (Los Angeles), and Linda Fields (Savannah) Brother-in-law Michael B. Sutton & Wife Anissa Sutton (Los Angeles), Nephews Dominick Robinson (N. Carolina), Anthony, Ike, & Aquarius Sutton (Houston), Rodney, Tiffany, Mike, & Dyonzia Sutton (Los Angeles), Great Nephews- Perry Hamilton-Battle (Atlanta), Troy & Koree Hines (Los Angeles), and A Host of close Friends that were just like Family

The family of Willie Herman Hamilton Jr. created this Life Tributes page to make it easy to share your memories.

Send flowers to the Hamilton family.