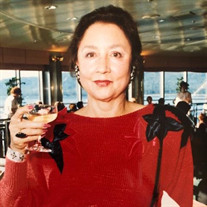 Vivian Carter Jenkins peacefully passed away in her daughter’s home on Saturday, December 14, 2019. She was ninety-seven years old. Vivian was born on September 12, 1922, in New Orleans, Louisiana. She was the daughter of John N. Carter and Viola Marie Harleaux and a sister to the late Adrenis Carter Reid. Growing up, Vivian and Adrenis were doted upon by their loving parents, paternal grandmother, and great grandmother – who all lived just doors apart. Vivian spent many summers and special occasions with her extended family of aunts, uncles and numerous cousins. Vivian’s favorite uncle, Alfin Harleaux, affectionately known as “Uncle Bud,” was special in her life. She lovingly told stories about “Uncle Bud.” She most enjoyed recounting how he had saved her life when she was a child – on two separate occasions! Vivian received her primary and part of her middle school education at St. Monica’s Catholic School in “uptown” New Orleans. When Vivian was fourteen, the family moved to Chicago, Illinois, where she attended Wendell Phillips High School. A few years after graduating high school, she met an accomplished physician, Dr. Charles M. Jenkins. They married and started a family together. Vivian soon became a mother and was devoted to their two children, Charles Jr. and Yolanda. While the children were very young, Vivian enrolled in Northwestern University but, after two years at the university, she found that raising two young children demanded her full attention and decided not to continue. Throughout their 39 years of marriage, she and her beloved Charles, traveled extensively to countries all around the globe. Vivian was very involved in her local community. She was an active member and chairperson of the Kenwood Homeowners Association; a founding member of the Chicago Chapter of Jack and Jill of America, Inc.; a patron of the arts; and a generous donor to various nonprofit and charitable organizations. In 1983, following the death of her husband, Vivian escaped the harsh winters of Chicago and moved to Northern California to be closer to her daughter, Yolanda. Together, they traveled to many exotic places. Even though Vivian lived out the rest of her years in California, she remained a proud New Orleans native and always managed to make frequent trips to her hometown. After all, Vivian’s favorite cousin, the late Alton Ricard lived there! He and his wife, Emelda, were the only two people who managed to get Vivian to pluck feathers off a duck and peel crawfish for the crawfish bisque, an incredible New Orleans Creole delicacy! In 2008, Vivian lost her only son, Charles. Following his death, she moved in with her daughter, Yolanda. In Vivian’s later years, Yolanda made sure to honor each of her mother’s milestone birthdays. They relished weekend trips with family and friends to Napa, where Vivian recently celebrated her ninety-seventh birthday. Throughout the years, Vivian maintained and enjoyed a special closeness with several members of her extended family. They spent many happy times together. Vivian was a beautiful person in every way. People who knew her saw her as an elegant lady who carried herself with grace, dignity, wisdom and confidence. She loved to read, enjoyed lively discussions about politics, liked getting out on the dance floor and traveling the world collecting art and artifacts representative of each country. Vivian’s passing was preceded by her beloved husband, Dr. Charles M. Jenkins, and her dear son, Charles M. Jenkins, Jr. She is survived by her devoted daughter, Dr. Yolanda Jenkins; nieces, Stephanie Reid and Vanessa Lewter; nephew, Bishop Frank M. Reid, III; as well as a host of loving cousins. Vivian, thank you. Your life was our blessing – may you be thought of often with broad smiles and warm hearts.

Vivian Carter Jenkins peacefully passed away in her daughter&#8217;s home on Saturday, December 14, 2019. She was ninety-seven years old. Vivian was born on September 12, 1922, in New Orleans, Louisiana. She was the daughter of John N. Carter... View Obituary & Service Information

The family of Vivian Henrietta Jenkins created this Life Tributes page to make it easy to share your memories.

Vivian Carter Jenkins peacefully passed away in her daughter’s...

Send flowers to the Jenkins family.