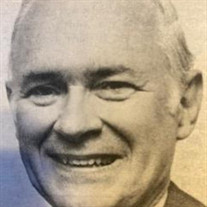 Ted Rausch, 92, passed away peacefully in San Leandro, CA on October 16, 2021. Ted was the beloved father of Debbie Weinberger, Eric (Cristy)Rausch, and John (Claudia) Rausch; step-father to Michael, Claire, Ed, Paul, Maggie, Campy and Laura Holton; grandfather to Dan, Jake and Christian, and “Uncle Ted” to Elisa, Rick, Cici, Mary and Michael Rausch of Portland, OR. Ted was preceded in death by his wife of 34 years, Evelyn Stackpoole Holton whom he married in 1977. Ted spent his formative years in Santa Cruz, enjoying life on the Boardwalk and experiencing the Big Bands of the 40’s at the Cocoanut Grove. In 1952 Ted married Patricia Smith and raised his family in the Outer Richmond. After earning his BA at CSUSF in 1955 Ted subsequently opened his own custom house broker and freight forwarder business in 1958, eventually opening offices in Long Beach, Portland, Chicago and Fresno. Ted was considered by many to be a maverick and a legend, and he held numerous leadership positions in local and national professional organizations. One of the highlights of Ted’s career was representing the U.S. as commission-leader of the first trade and shipping facilitation mission to the People’s Republic of China in 1980. Ted was a long-time member of the Olympic Club and Serra Club, and served on the board of Hospice by the Bay. Ted was a philanthropist, classic car aficianado (winning numerous Concours d’Elegance awards for his classic Jaguars), a passionate Republican, and a loyal 49’ers fan (enjoying season tickets for many years). Ted’s passing is mourned by those who loved and respected him. A memorial service will be held in Ted’s honor at Chapel of the Chimes, 4499 Piedmont Av., Oakland at 10:30 AM 11/16/21. The chapel offers the opportunity for safe distancing, but masks are required. A light buffet reception will follow. RSVP (your first and last name) to: [email protected] by 11/8/21.

The family of Ted Lee Rausch created this Life Tributes page to make it easy to share your memories.

Ted Rausch, 92, passed away peacefully in San Leandro, CA on...

Send flowers to the Rausch family.