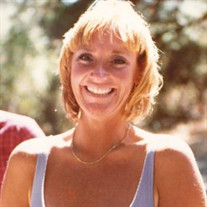 Lifelong Bay Area resident Suzanne Eloise Vannucci passed away on May 9th, 2022 in Oakland, California. Born to Margaret Burbank Vannucci and Elmer Salvatore Vannucci, on March 3rd, 1950 in Oakland, California. Suzanne grew up in San Lorenzo and graduated from San Lorenzo High School, class of 1968. As a girl, Suzanne loved her family and her pets, Blackie the poodle, and Frisky and Midnight the family cats. She sang in the local youth choir, swam for the Flying Fins Swim Club and excelled in school. Her favorite place and days as a girl were spent at the family cabin "It'll Do", in her beloved Long Barn in the California Gold Country. Suzanne attended California State University, Hayward where she graduated with a Bachelor's Degree in English and a minor in Spanish. In college, Suzanne began to emerge socially, and at 5'10 with big green eyes and a smile that never quit, once you met Suzanne you never forgot her. And although her physical presence made her stand out, it was her "people skills" that made her a star. Soon after college and a short stint at Singer Business Machines in San Leandro, Suzanne landed her first dream job as head of Human Resources for the iconic I. Magnin Department Store in Union Square, San Francisco (private office, pink swivel chair and all). it was at this time Suzanne moved from the East Bay to San Francisco and began her love affair with The City which would last the next 47 years. After I. Magnin, Suzanne's considerable talents and enthusiasm took her to her second dream job, Product Manager for Levi Strauss where the job took her all over the globe... She relished the travel and the chance to meet new people wherever she was: Asia, Mexico, Europe, and her own backyard. She was proud of her Italian heritage and travels to Italy were some of her favorites. Although she would forever miss her beautiful home in San Francisco, she made the move to Oakland in 2020, it was never lost on her she'd come full circle. As she was escorted over the Bay Bridge to Oakland, her driver asked "where ya going?" "Home" she replied... if you knew Suzanne, you know she never met a stranger. Fun, funny, smart, vivacious, kind-hearted to people and animals alike her entire life. Please join us for a Celebration of Life for Suzanne at a future date where we will raise a glass in her honor and memory. If you would like to be notified as to when and where, please text: 510-710-6679 or 510-710-6680 Suzanne is survived by her brother, Joseph W. Vannucci, sister-in-law Donna Vannucci of Castro Valley, CA, step-sister Cyndi Fleury of Fredricksburg, TX, her beloved cat Mambo, as well as a multitude of friends near and far. As per her final wishes, her ashes will be scattered in two places close to her heart.

The family of Suzanne Eloise Vannucci created this Life Tributes page to make it easy to share your memories.

Send flowers to the Vannucci family.