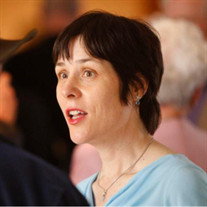 Susan Landauer, an art historian and independent curator dedicated to California art and San Francisco abstract expressionism, died Saturday, Dec. 19, at her home in the Montclair district of Oakland. The cause of death was lung cancer, her husband, Carl Landauer, said. She was 62. Landauer spent 10 years as the chief curator of the San Jose Museum of Art and wrote three books on art history. “I see her as the foremost historian of California art, deeply dedicated to bringing artists to public attention who are not well known,” said Carl Landauer, who met his wife in graduate school at Yale University, where they were both earning Ph.D. degrees. In addition to her scholarly publications, Landauer wrote a multitude of catalog essays, with the intent of raising the profile of artists working in the state where she was born and spent most of her life. “Susan was an important scholar working on significant art, who did not care a bit that the artists she embraced were not in fashion — until she changed that,” said retired Chronicle art critic Charles Desmarais. Among the artists whom she championed with great energy and enthusiasm were Petaluma Funk artist Franklin Williams; Los Angeles Pop artist Llyn Foulkes; the late abstract expressionists Hassel Smith and Bernice Bing; and Oakland contemporary painter Hung Liu. “Susan was passionate about researching into modern and contemporary art, not just as a job, but as a mission,” said Hung. “She had a close relationship with a lot of Bay Area artists, including me.” San Jose Museum of Art chief curator Susan Landauer stands in front of Mark Bulwinkle’s “Ducks over Dogtown.” Photo: Jeff Chiu, The Chronicle Susan Elise Klein was born in July of 1958 in Oakland. She grew up four blocks from the UC Berkeley campus, where her mother, Barbara Klein, was studying art en route to becoming an interior designer. The third of four children, she attended Emerson Elementary School and was bused to Martin Luther King Jr. Middle School in the first year of court-ordered desegregation. “That gave her a good sense of African American culture,” Carl Landauer noted. She graduated from Berkeley High School in 1976, and from UC Berkeley in 1982. She majored in art history with an emphasis on Chinese and Japanese art. When Landauer got to Yale in 1983, she shifted to American and Western art, and wrote her dissertation on the San Francisco abstract expressionists of the 1940s and ’50s, a topic she expanded into her first book, “The San Francisco School of Abstract Expressionism,” published in 1996. “One of her arguments was that the San Francisco school was simultaneous to, and not an imitation of, the New York school,” said Carl Landauer. The two met at a copy center in New Haven, Conn., when Carl dropped all of his change through a hole in his pants pocket, and Susan, who was waiting in line behind him, stooped to help pick it up. Landauer, next to artworks from “The Lighter Side of Bay Area Figuration” exhibit at the San Jose Museum of Art in 2000. Photo: Jeff Chiu, The Chronicle Her sister Lynn Klein of Berkeley described her as shy and sensitive but determined. “She was dogged,” Klein said. “She had a fierce defense of the underdog, be it animals, nature or people. And especially the overlooked artists from the Bay Area.” Once, when her Yale class visited a museum in Boston, Landauer identified a painting as the work of Roy De Forest, a practitioner of Bay Area Funk art. Then one of her classmates said, ” ‘That’s not art,’ and the professor agreed,” recalled Carl Landauer. She set out to prove them wrong, and in 2017, published a book on De Forest titled “Of Dogs and Other People,” in conjunction with an exhibition at the Oakland Museum of California. The Landauers were married in 1986, and after she finished her coursework, the couple moved to Oakland. Landauer was already organizing exhibitions in Bay Area museums and galleries when she was awarded her doctorate in 1992. During the 1990s she held positions as associate curator of American Art at the Los Angeles County Museum of Art and as founding co-director and curator of exhibitions at the San Francisco Center for the Book. Her longest tenure was as chief curator at the San Jose Museum of Art, from 1999-2009. “Even after she retired from the San Jose Museum of Art, she hosted events at her residence showing the work and having discussions,” said Hung. “Whenever there was an art opening, she was there.” At age 47, Landauer discovered that her presumed father, Harold Klein, was not her genetic dad. With her innate doggedness, she tracked down her biological father, William Berg, a retired zoology professor at UC Berkeley whom she had never met. “She instantly felt close to him,” said her sister, Lynn Klein, a fine art painter in Berkeley. But Berg died soon after they connected. Landauer became close to her newfound sister, Doran Berg. “She was trying to make up for a loss that she had somehow felt in her life,” Klein said. In August 2019, Landauer had been working on a run-down 1955 cliff house the couple had purchased on the Oregon coast. She started feeling back pain that shot down her legs and assumed she had pulled something. She was soon diagnosed with stage four lung cancer that had metastasized to her back. “She said, ‘I’m going to beat this,’ ” Klein remembers her sister saying. “She was dogged in that, too.” Survivors include her husband, Carl, of Oakland; sister Lynn Klein of Berkeley; brother Martin Klein of Oakland; and sister Doran Berg of Stockton. A memorial service will be planned after COVID-19. Obituary written by Sam Whiting of the San Francisco Chronicle December 21, 2020Updated: December 22, 2020, 3:05 pm

Susan Landauer, an art historian and independent curator dedicated to California art and San Francisco abstract expressionism, died Saturday, Dec. 19, at her home in the Montclair district of Oakland. The cause of death was lung cancer, her... View Obituary & Service Information

The family of Susan Landauer created this Life Tributes page to make it easy to share your memories.

Send flowers to the Landauer family.