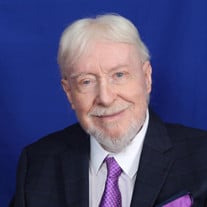 Richard Myles "Dick" Bowman passed away on November 20, 2020 in Kailua, Hawaii. He was 92. Dick was born October 5, 1928 to William John and Ruth Russ Bowman in Pasadena, CA. He spent most of his childhood in the Los Angeles area until his family moved to the San Francisco Bay Area in his early teens. He held many different jobs during his working years and was a 1967 graduate of Golden Gate College in San Francisco, 1974 graduate of Emory Law School at Emory University. He also attended UC Berkeley and played in the band. Dick’s passion was always his music. He was a professional trombonist beginning at age 12. He was proud that he was a member of the Straw Hat bands at Cal and Disneyland, the Oakland A’s Pep Band and the world-renowned Cell Block 7 band. His band was also seen playing in a nightclub scene in the Lee Remick movie, Experiment in Terror. He was a member of The Family for 57 years, and he played with the Monday Night band, the Pote's Band and the Thursday Night Jazz band in Honolulu until Covid-19 made it impossible to gather; even then he continued to play at home. Dick is survived by his daughters, Lin Bowman (Paul McAnelly) of Oregon and Debra Walker (Jim) of Nevada; stepsons Tommy Vadnais (Maggie) and Patrick Vadnais (Carolyn Street), both of California; 13 grandchildren; 17 great-grandchildren; and 4 great-great-grandchildren. In addition, he leaves his long-time caregiver, Jiedan Guan, and her mother, Baorui Guan, who loved and cared for him and who made it possible for him to live his last days at home. He will be remembered for his love of animals and his kindness and generosity to all he met. The family requests donations to the Dementia Society in Dick's name (dementiasociety.org) in lieu of flowers. https://viewneral.zoom.us/j/96195194539?pwd=MGlQOFFiTVRGTGU3N1N0a2ZUbTJuUT09 Hello, You are invited as a guest to the Viewneral® Funeral Service noted below. When: Jan 04, 2021 12:00 PM Pacific Time (US and Canada) Viewneral Service Name: Funeral services for Richard Bowman Please click the following link to join: https://viewneral.zoom.us/j/96195194539?pwd=MGlQOFFiTVRGTGU3N1N0a2ZUbTJuUT09 Viewneral ID: 961 9519 4539 Password: 974962 Or iPhone one-tap: US: +16692192599,,96195194539# or +16465189805,,96195194539# Or Telephone: Dial(for higher quality, dial a number based on your current location): US: +1 669 219 2599 or +1 646 518 9805 Webinar ID: 961 9519 4539 International numbers may be available: https://viewneral.zoom.us/u/aYpWCerIm

Richard Myles "Dick" Bowman passed away on November 20, 2020 in Kailua, Hawaii. He was 92. Dick was born October 5, 1928 to William John and Ruth Russ Bowman in Pasadena, CA. He spent most of his childhood in the Los Angeles area until his family... View Obituary & Service Information

The family of Richard Bowman created this Life Tributes page to make it easy to share your memories.

Send flowers to the Bowman family.