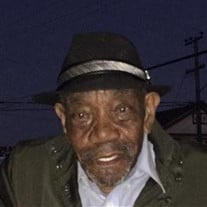 On June 9, 1933, Ricardo Brito Diaz was born to Emilio Diaz and Paula Brito in Havana, Cuba, where he grew up affectionately known as, Matanza. As a young adult, he later worked for the Islands Railroad Company, doing maintenance and repair on the railroad tracks. At 30 years old, 4 years after the revolution, Ricardo and his 7 friends made the decision on August 17, 1965 to flee Cuba for the United States. It became obvious that the island was no longer going to be as they knew. After 4 days lost at sea, Ricardo and his friends were rescued by the U.S. Coast Guard. On September 4, 1963, Ricardo met Mosella Lee in Phoenix, Arizona. In that they conceived Paula Diaz, his oldest daughter. In their union, Mosella taught Ricardo English and Ricardo taught her Spanish in exchange. Later in 1967, Ricardo came to Oakland, California to join the Laborer’s Union Local 304. In 1968, Ricardo met Loyce Bennett and assisted her in raising her daughter Allonda Bennett. In 1975, they had Jocelyn Diaz, who is Ricardo’s youngest daughter. In 1994, after 26 years of working in Construction, Ricardo retired, giving him extra time to enjoy the Oakland A’s and the Raiders. His greatest joy was his family and his grandchildren. Ricardo is preceded in death by his parents, brother Jose Diaz, and sister Hydee’ Diaz. He leaves to cherish his memory, his daughters Paula Diaz, Jocelyn Diaz and Allonda Bennett. His grandchildren, April Myles, Ashley Brown, Amber Hill, Asia Hill, Ashante’ Hill, Adrian Hill, Aniyah Hill, Jayson Davis, Zedikiah Woods II and Kanisha Woods. His Great Grandchildren, Indya Young, Celeste Delgadillo, Jontori Lee, London Reeves, Zaniyah Woods, Zedikiah Woods III, Makiyah Woods and Allondra Woods. Also longtime friend Monzell Harding and extended family in Cuba who all love and will miss Ricardo dearly.

On June 9, 1933, Ricardo Brito Diaz was born to Emilio Diaz and Paula Brito in Havana, Cuba, where he grew up affectionately known as, Matanza. As a young adult, he later worked for the Islands Railroad Company, doing maintenance and repair... View Obituary & Service Information

The family of Ricardo B. Diaz created this Life Tributes page to make it easy to share your memories.

Send flowers to the Diaz family.