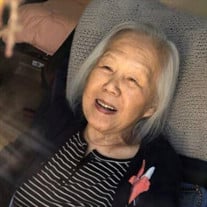 Portia Low (Owyoung Wei Lon) was born on August 1, 1926, in San Francisco, California. Her life was characterized by perseverance through trials, dedication to family, and tender caregiving during the final years of her husband, Dick Low. Her notable personal traits were frugality (e.g., love of couponing), friendliness, and a beautiful smile. Born to Henry and Hong Tai Owyoung, Portia spent her early years in San Francisco Chinatown. Her siblings were Leland, Helen, Jennie, Arthur, and Gene. She started school at Commodore Stockton School. Trials began early in her life. The family faced the Great Depression, poor economic prospects, and discrimination against Chinese in America. Portia was pulled from school, and the family relocated to Dai Leng, China, in 1935. In China, the family lived with her paternal grandparents. Her father returned to America the next year, but the rest of the family remained in China. Life was difficult and unstable. And soon the area suffered the Japanese invasion of China. The family fled to Macau, staying there from 1938-1942. Her father sent money from America to partially support them. Returning to Dai Leng in 1942, the family experienced the deaths of the grandparents and older brother Leland. The family house and part of their land was also confiscated by the Chinese Communists. Portia learned to persevere through these tough times. After World War II, the family was able to return to America in 1948. They settled in Oakland, California. Soon Portia, now a young woman, met Dick Low. He had come to America as a youth in 1921 and worked his way through hardship to become a store owner. Despite the age difference, the two were mutually attracted and agreeable to marriage. They married on August 9, 1949. Portia and Dick were good partners in business and in parenting their three children, Ray, Stephanie, and Ken. The grocery store business was not easy, involving long hours and physical danger in the poor neighborhoods they served. But Portia persevered through her smarts and her dedication to family. She and her husband continually sought to upgrade their business prospects, their housing situation, and school opportunities for the children. This resulted in several changes in store locations, residences, and schools for the children. Finally, Dick and Portia retired from the grocery store business in 1974 after putting their children through college and into adulthood. Portia was still young enough to work several more years in food service at Bella Vista Elementary School. She and Dick also enjoyed travel and activities that they had denied themselves during their grocery store years. One of their favorite memories was their return to China to visit their old villages. They eventually saw their children raise their children into adulthood. She loved seeing her grandchildren and (years later) her great-grandchildren. Dick Low experienced kidney failure in 1994. Portia was his caregiver – driving him to dialysis three times a week, managing his schedule of medications, and attending to his physical needs. He astonished the doctors by surviving for 13 more years. That would not have happened without Portia’s love, attention, and wise decisions. Her husband’s death in 2007, coupled with her recent stroke, caused Portia to begin a slow decline. The medical problems became more severe in recent years. She moved from her Oakland Chinatown condo to Sunrise Villa San Ramon in 2017, and then into the Green Valley Board & Care Home in recent weeks. Portia died on June 4, 2020. Now that her time on earth has passed, Portia is going to another home. In her later years, both she and Dick had become children of God by inviting Jesus into their hearts. We now commit her into God’s hands and His presence. Her earthly life of hardship, danger, and sickness is over. Her new home is a better one. We who follow behind her look forward to rejoining her there. To ensure the health and safety of our community, we are following all guidelines set by local, state and CDC officials. If you are planning on attending a service, please contact the funeral home in advance, so that we can plan accordingly.

Portia Low (Owyoung Wei Lon) was born on August 1, 1926, in San Francisco, California. Her life was characterized by perseverance through trials, dedication to family, and tender caregiving during the final years of her husband, Dick Low. Her... View Obituary & Service Information

The family of Portia Low created this Life Tributes page to make it easy to share your memories.

Send flowers to the Low family.