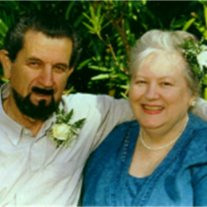 &#8220;This world is not conclusion, A sequel stands beyond, Invisible, as music, But positive as sound.&#8221; Emily Dickinson Marilyn Adams Torchio passed from this life on November 19, 2015 followed by her adoring husband, Martin F. Torchio... View Obituary & Service Information

The family of Martin Torchio created this Life Tributes page to make it easy to share your memories.

“This world is not conclusion,
A sequel stands beyond,
Invisible,...