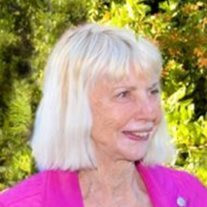 Born Marlene Johanna Sweazey to Jeanette Elizabeth Nelson and Wallace Andrew Sweazey. She was the oldest of four daughters. Marlene grew up in the Oakmore neighborhood in Oakland and attended Oakland High School. Marlene met her loving husband Gordon Leo Darling in 1952. After they married on July 25, 1954 the young couple moved to the Darling compound now across from Ascension Orthodox Cathedral on Lincoln Ave in Oakland. There the Darling family has lived for five generations. And it was there Marlene was to spend the rest of her life. In the mid-50’s Marlene and Gordon bought the beautiful Sunset Magazine house that was on display at the Oakland Home and Garden Show and they moved it to a lot on the Darling compound. She loved her very special house which became their loving family home for many years. Later she tended other Darling properties; renovating two historic homes on on the family property. Grown from seed brought by a Darling ancestor stands one of the largest and oldest English Oaks in California. Marlene’s mother, Jeanette, was from a first generation Swedish family. Her father, Wallace, was a successful owner of the elevator company that designed the elevator for the Golden Gate Bridge in San Francisco. Wally is descended from Andrew Swayze, who immigrated from England to Massachusetts in 1629. Marlene worked in several jobs during her life…. her favorite of which was receptionist for the Oakland TV Channel KTVU. Marlene Johanna passed away on June 25th in the presence of her loving children after a battle with cancer. A loving wife to her husband Gordon who preceded her in death in 1996. She leaves behind a son Gary Darling, daughter-in-law Eileen, grandson Ryan Darling, a daughter Julie Stortroen and son-in-law Andrew. She was preceded in death by her sister Pamela VanBuren on January 30, 2014. She is survived by her sisters Carol (Merrill) Higham, Patricia (Richard) Engles and her brother-in-law Patrick Van Buren and their families. Thank you for joining us today as we celebrate our mother. We remember her years of kind nurturing, gentle worry, admonition, enduring smiles and loving friendship. Her engaging, outgoing, cheerful personality and great sense of humor we cherish and will miss. Following today’s memorial service please join us for a small reception across the street in her home of sixty years.

The family of Marlene Johanna Darling created this Life Tributes page to make it easy to share your memories.