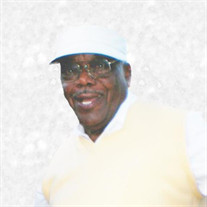 Louis Greer April 8, 1922 – March 30, 2020 passed peacefully in his Richmond home -- warmly kissed by his wife, Sharon, embraced by his son, Richard, and watched by his care-giver, Danny. Greer, as he liked folks to call him, left the farm of his father and mother, Armstead & Cordia in Point TX at the age of 12 to learn entrepreneurship from his older brother, Theo, and sister, Millie, in Dallas TX where Theo owned a diner, meal delivery service, and drug store. Greer later joined the Army during WWII after which he was honorably discharged at the conclusion of the conflict. As a civil servant at the Mare Island Naval Shipyard in Vallejo CA, Greer along with 20 other courageous men fought for and won concessions towards equal pay, treatment, and advancements as their white counterparts. After he completed training as a GIA certified gemologist, Greer left the shipyard to run his own jewelry business for over 40 years on the corner of Ashby & Sacramento Street in Berkeley CA. Using the equity from his store, where he also lived upstairs, Greer renovated the first of many residential properties for sale or rent. Later he branched out into commercial real estate to own multiple storefronts and residential properties throughout Oakland, Berkeley, Richmond, and Tracy. Seemingly everywhere in the Bay Area, people knew and greeted him with joyful enthusiasm. He enjoyed world travel as well as local camaraderie with fellow business and civic leaders. He outlived his 10 bothers and sisters, his eldest son Michael Sr., and grandson Michael Jr. To cherish his memory his wife, Sharon, and son, Richard, two grandchildren, Tieshawn and Zurich (Jordan), a devoted cousin, Karl Seabrook, a host of great grandchildren, nieces, nephews, relatives, and friends survive him. Because of COVID-19, the announcement for a memorial service is planned for later this summer at the earliest when the stay at home orders are lifted across the country.

Louis Greer April 8, 1922 &#8211; March 30, 2020 passed peacefully in his Richmond home -- warmly kissed by his wife, Sharon, embraced by his son, Richard, and watched by his care-giver, Danny. Greer, as he liked folks to call him, left the... View Obituary & Service Information

The family of Louis Greer created this Life Tributes page to make it easy to share your memories.

Send flowers to the Greer family.