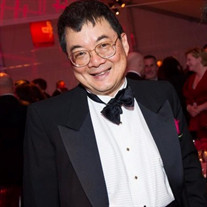 Leo C.H. Soong, age 74, passed on after a decade-long battle with cancer on Friday, March 26, 2021 in Walnut Creek, CA. He left this world surrounded by his loving family and friends. Born in 1946 to Tse An Soong and Ji Ing Woo, Leo and his older brother Ronald belong to the Soong Family, one of the most prominent families in modern Chinese history. Leo is survived by his wife, Shirley, and his five children: Shumin, Katherine Jean, Shirley-May, Charles Frederick, and Abigail Elizabeth. In his early years, Leo travelled often with his parents. He spent a number of summers in Taiwan with his aunt and uncle, Madame and President Chiang Kai-shek. There, he spent his time engaged in deep conversations and surrounded by great meals and company. As a teenager, he was certified to operate an ROC Army tank in Taiwan. Later in his life Leo addressed a number of audiences to give context on the family’s historical background through Chiang Kai-shek’s diaries, which were released to the public in 2005 through the Hoover Institution at Stanford University. Leo was a life-long learner and well-versed in an array of subjects. In 1967 he received his Bachelor's in History with distinction from Stanford University and in 1970 his MBA from Harvard Business School. After graduating, Leo spent one year in Brazil after being awarded the Frederick Sheldon Traveling Fellowship- a scholarship granted to select Harvard graduate students for research and study. In 1977, Leo went on to co-create Crystal Geyser Water Company, the first sparkling mineral water in the United States. Leo later returned to school and received a graduate certificate from Multnomah Biblical Seminary in 2000. Leo was affiliated with a number of boards across a variety of industries—in capacities ranging from Director, to Trustee, to Chairman. Most notably, Leo spent over 20 years working with the team at AAA Northern California, Nevada & Utah. Other board affiliations included American Automobile Association, ACA Holdings, Public Broadcasting Service (PBS), Sutter West Bay Hospitals and Medical Foundation, Multnomah University, Christian Witness Theological Seminary, Barclays Global Investors Funds and Master Investment Portfolios, California Pacific Medical Center and affiliated entities, KQED, and a number of tech and biotech startups. He was known in his circles as an intellectual to the core, forever curious and questioning. Leo spoke a number of languages fluently including Spanish, French, Portuguese, Shanghainese, Mandarin, Hebrew, as well as several more; it is unclear how many languages he actually spoke as he would often break into song when discovering his fellow interlocutor had origins from another country. In his free time, Leo utilized his experience from his first job at Wells Fargo Bank as an investment officer and AVP. He frequently contributed articles to online databases as well as regularly shared his market analysis with his children and close friends. He successfully filed two patents that were approved by the US Patent and Trademark Office- one being an algorithm he created to bypass the dirt brokerage business utilized in large scale construction projects. There was a wholesomeness and playfulness about Leo that many of his friends admired and noted. He loved the simple pleasures in life- ice cream and potato chips, daily walks, coffee with friends, reading. He often surprised even his family with hobbies. For example, few knew of his love for yo-yos, military history magazines, his collection of custom range rifles, or his goldfish who actually enjoyed being pet! Even more surprising was his passion for arm wrestling; his typical contestant ranging from pre-teen to young adult. Despite many notable achievements, Leo was a humble man with a quiet ego and little patience for airs. He focused on helping others in his community and no problem was ever too trivial. Leo had an open door policy; those in his community often sought his opinion and support on topics ranging from personal conflicts to career advice. Both Leo and Shirley were devoted to missionary work. Together they travelled and lived in challenging conditions to spread the gospel, at one point eating only potatoes and cabbage for a month in Siberia! Leo was a practical man who did not embrace excess. A fellow board member once shared that Leo often refused to fly first class with his peers, and instead, opted for economy class where he could read without being interrupted. With his passing, the world has lost a light, a unique soul, a man who loved his community and God with every ounce of himself. In his place he has inspired many, from the once children he taught over his many years as a Sunday school teacher to fellow colleagues across the world. We will miss his unwavering commitment, sharp wit, calming presence, never-ending supply of cultural and historical facts, and the respect, care, and kindness he offered to all. Funeral services will be held on April 15th at Chapel of the Chimes in Oakland, CA. A memorial service will be held virtually on May 15th to commemorate what would have been his 75th birthday.

Leo C.H. Soong, age 74, passed on after a decade-long battle with cancer on Friday, March 26, 2021 in Walnut Creek, CA. He left this world surrounded by his loving family and friends. Born in 1946 to Tse An Soong and Ji Ing Woo, Leo and his... View Obituary & Service Information

The family of Leo C.H. Soong created this Life Tributes page to make it easy to share your memories.

Send flowers to the Soong family.