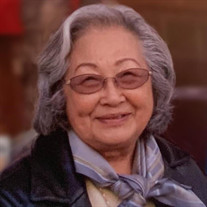 Lai Gee Chop Webster Lai Wah Gee Chop Webster, a devoted mother, grandmother, hostess extraordinaire, and mah jong enthusiast, died in Sunnyvale, California, on June 17 at the age of 90. Born in Toisan County, Guangdong Province, China, she immigrated with her mother and two older sisters to the United States in 1933 as a two-year-old. Her father had come to America in 1912 and returned to China four times, finally bringing his young family in 1933. She spent the next 28 years in Oakland, California’s Chinatown. At a young age, she took on enormous family responsibilities. Her immigrant parents – father Gee Seow Hong and mother Gee Suey Ting – had small businesses to run. Her two older sisters – Gee Li Hong and Gee Li Keng – worked as domestics. Ms. Chop Webster was tasked with caring for her younger siblings, Nellie, Leslie, Florence, and William. Along with her siblings, she worked at the family restaurant, the Great China, when not in school. Even after she graduated from Oakland Technical High School in 1948, she helped at the restaurant until it closed in 1961. After high school, she worked at the Naval Supply Center in Oakland. In 1950, she married Allen Chop, also a Chinatown resident, and had two daughters, Allison and Alexandra. She and her family moved to Sunnyvale in 1961 to be closer to Allen’s job. She graciously made her new home in Sunnyvale a gathering place for her Oakland family and friends as well as new friends in the region that later became known as Silicon Valley. Her husband, an Army veteran, worked as a statistical engineer in the quality control division of Lockheed. Ms. Chop Webster began working outside her home as a floral designer for a local gift shop, then at companies such as Omron, Sigmaform, Varian, and Macy’s. It was at Sigmaform where she met Danny Webster, who became her second husband after Allen died in 1973. She helped care for Mr. Webster’s two daughters, Laura and Leslie, from a previous marriage. She loved to cook, socialize with family and friends (her cherry-picking parties were a family legend), and, especially, play mah jong. In retirement, she volunteered at the Sunnyvale Senior Center, helping coordinate field trips and teaching mah jong. One of her favorite activities was joining her extended family for birthday lunches, and bigger special holiday celebrations (Chinese New Year, Christmas Eve), as well as attending important events of her siblings, daughters, nieces and nephews, and grandchildren. She also loved to watch Korean and Chinese dramas on streaming services. She is survived by daughters Allison Chop (Ilene Hruby) and Alexandra Lieu (Raymond Lieu), Danny Webster’s daughters Laura Thompson and Leslie Schock, siblings Nellie Wong, Flo Oy Wong (Edward K. Wong), William Gee Wong (Joyce Mende), grandchildren Allen Lieu (Samantha Tran), Lauren Lieu, and Marc Lieu, and numerous nieces and nephews. Funeral services will be on Monday, July 12, 2021, at 10:30 a.m. at Chapel of the Chimes, 4499 Piedmont Ave., Oakland, California, with interment to follow at Mountain View Cemetery, 5000 Piedmont Ave., Oakland. In lieu of flowers, please donate to the Angel Island Immigration Station Foundation, www.aiisf.org, the American Heart Association, or the American Cancer Society.

The family of Lai Gee Chop Webster created this Life Tributes page to make it easy to share your memories.