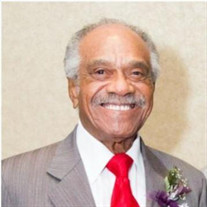 As the fourth child of the late Marion Jackson, Sr. and Allie Ward-Jackson, James Gentry Jackson was born on May 14, 1929, in Dallas, Texas. The early stages of his education were developed in the public schools of &#8216;West Dallas&#8221;... View Obituary & Service Information

The family of James Gentry Jackson created this Life Tributes page to make it easy to share your memories.

As the fourth child of the late Marion Jackson, Sr. and Allie...

Send flowers to the Jackson family.