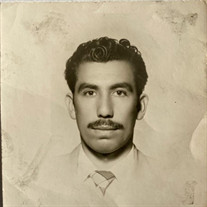 Fidel T. Saenz, 90, of Oakland, California, passed away April 14, 2021. He was born in Mexico City on May 1, 1930. He attended the National Polytechnic Institute of Mexico, one of the largest public universities in Mexico. He married Delfina Talancon, in 1956, in her hometown of La Piedad, Michoacán. They moved to Juarez, Mexico living together for a short time. Fidel left and went to California in search of a better life. Delfina stayed in Mexico for a few years while Fidel established himself in the United States. Once he settled in, he sent for his wife and they started their life together in Alameda, CA before buying a home in Oakland where they lived together raising their two children. He got his start working as a mechanic for an independent garage before moving on to a job at Southern Pacific Railroad where he worked for several years. He retired from the Chevron Refinery in Richmond, California, where he worked for nearly 20 years as a diesel mechanic. He was a man with many hobbies and interests who loved sports. A life long fan of the Mexican soccer team, Chivas, in Guadalajara, Mexico. Fidel played for the local Chivas soccer team after he arrived in the East Bay. He ran an independent sports newsletter for several years where he wrote about soccer teams and other sports teams in the Bay Area. In his spare time Fidel served as a photographer for the Comite, a Mexican Culture Committee that put on cultural events in the Bay Area including the Mexican Independence celebrations held at San Francisco City Hall. He also worked with then Mayor Diane Feinstein photographing events held at city hall in San Francisco. A true patriarch, he will be deeply missed. He is survived by his son, Pedro, daughter-in-law Maria, his daughter, Ofelia, son-in-law Martin and his three grandchildren, Phillip, Nadia and Steven. Funeral services will be held at St. Jarlath’s Church in Oakland. Date and time to be announced.

Fidel T. Saenz, 90, of Oakland, California, passed away April 14, 2021. He was born in Mexico City on May 1, 1930. He attended the National Polytechnic Institute of Mexico, one of the largest public universities in Mexico. He married Delfina... View Obituary & Service Information

The family of Fidel T. Saenz created this Life Tributes page to make it easy to share your memories.

Send flowers to the Saenz family.