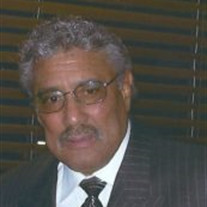 Donald Beverly Apperson was born October 4, 1933, the elder son of Festavis and Marjorie (née Stocking) Apperson, in Oakland, CA. He attended Longfellow Elementary School, Woodrow Wilson Junior High School, graduated from Oakland Technical High School in 1951, and then briefly attended Santa Rosa Jr College. Donald joined the Air Force in 1951, represented the service as a boxer in the 205-pound weight class, and was honorably discharged in 1955. In 1956, he married Coline Henry and from that union came two children, Sonja and his name sake Don. In 1963, Donald married Lorraine Elizarde and together they had a son, Darin. Don was recognized as a top salesman in both the furniture and beverage industries His career included positions at the Apperson family-owned Bellings Furniture Store, Redlicks in San Francisco, Levitz Furniture, and Juilliard Alpha, from which he retired in 1998. After retiring, Don went to work with Nam Lam his friend of more than three decades and owner of G+N Produce Co. in Oakland Chinatown where Don had made numerous friends. Don was preceded in death by his son, Troy, and a grandson, Carlo. He is survived by Lorraine, his wife of 56 years; younger brother John; children Sonja (son-in-law Guido), Don and Darin (daughter-in-law Elizabeth); grandchildren Antonio (Vicky), Derek, and Sean; great-grandchildren Cora and Lesieli; in-laws Lane, Francine and Jim; nieces and nephews Angela, Joseph, Lisa, Kim, Kevin, Brandon, Laney, Kenny, Anthony, Ron, Sharon; grandnieces Abrielle and Aiden, grandnephews Yavair and Ryan; cherished friends Nam, Benny, Joel, Winston, Art, Donna, Llanes, Copada, the Geddes-Osbornes and their families; dear neighbors Marnie, Ned, Cindy, John, Dorothy, Cheryl, Andrea, Andrew and a countless number of relatives and friends. Don was an avid fan of football, basketball, track and field, and horse racing and a faithful booster of Bishop O’Dowd athletics. He enjoyed a good movie and was a pioneer of theatre-style home entertainment and its big screens. He loved the world outside his home and saw Germany, Denmark and Sweden during his military service. He loved car trips with Lorraine, throughout the Bay Area, up and down the coast of California, to Reno, Las Vegas and Laughlin, and across the country to Connecticut and North Carolina. Don took great delight in the youngsters of his family, for whom he sometimes created imaginary friends — especially his grandchildren and great grandchildren. As the patriarch, Don felt extremely blessed to have such a loving family.

The family of Donald Beverly Apperson created this Life Tributes page to make it easy to share your memories.