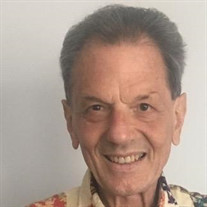 CEO/Founder/Songwriter Executive Producer Lounge Renown Records July 27, 1948 - August 31, 2020 Funeral services will be held 12:00 noon September 9, 2020, at St. Mary’s Cemetery 4529 Howe Street Oakland, CA, Father Jayson Landeza officiating. Arrangements have been entrusted to Chapel of the Chimes Oakland, 4499 Piedmont Ave, Oakland, California 94611. Daniel was born in Oakland, California, to Karl and Helen Orth on July 27, 1948. Daniel graduated from Piedmont High School and received his bachelor’s degree from St. Mary’s College in English and Philosophy. He was a lifelong fan of the St Mary’s Gaels’ basketball team. As a young man he was a vendor at local sports arenas where he was able to watch up close many of the sports and music greats of the early 70’s and saw the Oakland A’s win the 1973 World Series. From 1973-2006, he worked as a lead-deckhand for The Blue and Gold Fleet, mostly ferrying tourists to Alcatraz. While working the Alcatraz run Daniel met numerous celebrities, including President Jimmy Carter, US Open golf champion Ken Venturi and relatives of Al Capone. He had a prolific memory, a love of both sports and music and remembered many of his passengers. “I had a blast working the Alcatraz ferryboat run for those 33 years reporting to work every day in the heart of Fisherman's Wharf.” Dan took early retirement at age 55 with IBU International Longshoremen's & Warehousemen’s Union to spend the rest of his life working on rock and pop music; Dan’s greatest passion and joy was music and writing rock lyrics. His life was changed forever in 1958, when at age 10 when he heard Elvis' "Don't Be Cruel" on his transistor radio. “At that moment I fell in love with rock music. And my love affair with great rock and pop music forever kept growing.” Dan became a guitar player and songwriter and also tried standup comedy as “Dan Deluxe”. His first musical collaboration began in the 70’s with Donald Allan Phillips on the first record label he created, Hard-Boiled Records. The “Phil Phillips” band recorded five original classic rock songs with local guitar rock star Joe Satriani. Dan co-wrote two of the songs, (Cruising the Strip and Super Dose) with Phillips. In 2009, Dan met Duane Patton and music producer Jay (Jaee) Logan of the R&B band Patton Leather at the Peppermill Casino in Reno, NV. After that meeting Dan decided to fulfill his dream of starting his own record company and became an executive producer and independent record label owner of Lounge Renown Records. Dan enlisted Patton Leather band member, producer/songwriter Jay (Jaee) Logan to help, and a lifetime friendship was forged. Together with Logan, Dan’s label created the 2017 instrumental album Sun Rider that featured musicians from Earth Wind and Fire that earned Grammy consideration. Daniel is survived by his sisters Maureen Orth of Washington D.C. and Christine Orth of San Francisco, his nephews Luke Russert and Kevin Swanson, both of Washington D.C. In Appreciation The Orth Family and Logan family deeply appreciate the heartfelt prayers and condolences and are thankful for all the love and support we have received. These acts of kindness helped lift our spirits and remind us that we are not alone in our time of mourning. Honorary Pallbearer’s Luke Russert Kevin Swanson David Jackson Kennedy Lofton Jack Druesand, Duane Patton To ensure the health and safety of our community, we are following all guidelines set by local, state and CDC officials. If you are planning on attending a service, please contact the funeral home in advance, so that we can plan accordingly.

The family of Daniel Peter Orth created this Life Tributes page to make it easy to share your memories.

Send flowers to the Orth family.