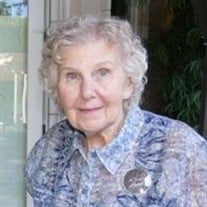 Beva Peters, 92, of Fairfield, California, passed away November 18, 2021. She was born on May 1, 1929, in Erie, North Dakota, daughter of Frederick and Emma Stibbe. She was one of 6 siblings. Beva met the love of her life, Carl Peters, in Fargo, North Dakota where they both worked at Sweeney Bros Tractor Co. They were married October 2, 1950 and celebrated 56 years of marriage. They moved to Idaho and had their first daughter, Susan, in 1951. The following year, they moved to San Pablo, California. Daughter, Linda, was born in 1954. In 1960, their son, Pete, was born and they purchased their first house where they lived until 2006. Her remaining years, she resided in Fairfield, near her family. Beva loved to cook and bake, and she was fantastic at it. If a child, grandchild, or great grandchild asked for something, it showed up shortly after. Her homemade buns, during the holidays, are legendary!! She also liked to read and work on puzzles. Her favorite hobby was collecting…Anything!! Dolls, spoons, stamps, pens, key chains, cards, recipes, book markers to name a few!! But her favorite thing was family as told by the pictures in her house. Every wall and tabletop is filled with family pictures – those by blood and those by love. She was “Mom” to many, Nami/Grandma, Great Grandma to so many more!! Loved by all!! Left to mourn her passing is her sister Merilyn Rogers of Alabama, her two daughters, Susan Eikenbary of Montana, Linda Martellaro and her husband Rick of Fairfield, and her son Pete Peters and his wife Julie, of Fairfield. She had 10 grandchildren - Ryan (Burke) Eikenbary, Trevor (Kristina) Eikenbary, Ross Eikenbary, Russell (Melissa) Martellaro, Chris (Sara) Martellaro, Kyle (Jessica) Martellaro, Jenna (Brittany) Peters, Amanda (Jason) Cardwell, Sara (Oleg) Ananyev, Carl (Taylor) Peters and she was blessed with 19 great grandchildren. She was preceded in death by her husband, Carl Peters, 2 brothers, 2 sisters and a son-in-law. She will be buried next to her husband, Carl, at the Sacramento Valley National Cemetery. At her request, there will be no public service. In lieu of flowers, please consider donating to her favorite charity, St Jude, in her honor.

Beva Peters, 92, of Fairfield, California, passed away November 18, 2021. She was born on May 1, 1929, in Erie, North Dakota, daughter of Frederick and Emma Stibbe. She was one of 6 siblings. Beva met the love of her life, Carl Peters, in... View Obituary & Service Information

The family of Beva Mae Peters created this Life Tributes page to make it easy to share your memories.

Send flowers to the Peters family.