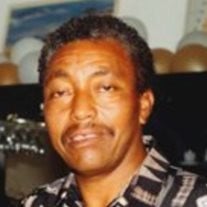 Our beloved Asgedom Ghebremedhin was born August 28, 1953 in Geza Lamza to Ghebremedhin Testbah and Abrahet Temanu. He attended elementary and middle school in Debarwa and went on to graduate from Point Four in Asmara. He was accepted to university in Ethiopia, but due to fmancial constraints, he started working at Wenji Sugar Factory in Ethiopia. After a year, he moved to Assab to work in a petroleum refinery and married Tsige Kifle shortly after in 1969. In late 1960s, Asgedom became involved in the growing political struggle for the independence of Eritrea. Due to his patriotic activities, he was imprisoned and tortured by the Ethiopian army. Despite his imprisonment, Asgedom continued with his political involvement and joined the national liberation struggle as a member of the Eritrean Liberation Front (ELF). In 1975, he was forced to flee his home after receiving a tip that the Ethiopian army was coming to execute him. Tsige and Asgedom •eventually became separated during the chaotic events that transpired. After searching for his beloved wife for days, he presumed her to be dead. This heavy loss motivated him to continue fighting and he became an active soldier with the ELF. It was through God’s grace that he was reunited with his wife in Yemen who was receiving medical treatment. Shmily after being reunited, Tsige and Asgedom fled to Sudan, and eventually made their way to Holland via Italy. In order to be closer to his brother, the couple along with their two children, made their way to Oakland, California in November 1981. His persistence and passion for education enabled him to obtain his bachelor’s degree in sociology from San Francisco State University while working two jobs to suppmi his family. After graduating, he went on to work fulltime for the City of Oakland for 26 years. Asgedom was heavily involved in the Eritrean community. He was an active member of the ELF (now EPDP) and a strong advocate for political democracy in Eritrea. He was instrumental in growing the first Eritrean Community Center in Oakland. He was one of the founders, and a dedicated member, of the St. Mary’s Eritrean Orthodox Church. He poured his heart and soul into the church always being the first to arrive and the last to leave after making sure the church was in order. At every wedding and community celebration, Asgedom was the life of the party and a source of energy and happiness for everybody there. Everyone was filled with joy watching him dance and play the koboro. He was an avid soccer player, and played every Saturday moming with his team. He was immensely loved by his family, friends, and community, and has left a big• void in all of our heatis. We are comfmied knowing that he is with our heavenly father, and reunited with his parents, and siblings Berhane, Rishan, Russom, Milashu, Mehreteab, and Tecklehamanot. Asgedom is survived by his wife, Tsige Kifle; his kids Regat, Daniel, Kiko, Rahwa, and Betial; ten grandchildren; numerous nieces and nephews; and his siblings Abraham, Abeba, Fessahaye, Teckle, Kiflom, and Tefera.

Our beloved Asgedom Ghebremedhin was born August 28, 1953 in Geza Lamza to Ghebremedhin Testbah and Abrahet Temanu. He attended elementary and middle school in Debarwa and went on to graduate from Point Four in Asmara. He was accepted to university... View Obituary & Service Information

The family of Mr. Asmerom Ghebremedhin created this Life Tributes page to make it easy to share your memories.