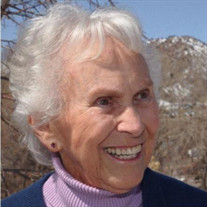 Anne Storm Brandenburg, 96, passed away in Alameda County on May 17, 2020, with her local family by her side. She was born to the late Thurman and Irene Storm, September 6, 1923, in Alton, Illinois. Anne graduated from Mattoon High School and received a Bachelor’s degree from the University of Santa Clara and later a Master’s degree in Education, from the University of Santa Clara in 1981. She married the late Warner Brandenburg on December 31, 1945, they met while working in the Air Force. Anne and Warner lived many places while in the Air Force, including Frankfurt, Germany. After Warner retired from the Air Force, they moved to Los Gatos, California where Anne resided for over 54 years. Anne is survived by two children: Barbara Diekmann, of Lafayette, Colorado and Bill Brandenburg, of Piedmont, California as well as her son-in-law Jim Diekmann and her daughter-in-law Jennifer Brandenburg. Anne is also survived by 4 grandchildren: Megan Lane, Molly Wright, Alexandra Brandenburg and Storm Brandenburg and 4 great grandchildren: Maggie Lane, Nora Lane, Ben Lane and Quincy Wright all of whom brought great joy to her life. Anne was predeceased by her loving husband in 2003. Anne had a passion and zest for life. She was feisty, loved to dance, and was a hostess always ready for a dinner party with friends and family. Anne had an infectious smile, eloquence in life, and had a kind and compassionate spirit. Anne loved to paint and do needlepoint which were admired by friends and family. Anne and Warner traveled the world together, collecting many friends and memories along the way. Anne had traveled around the world three times and had been to 49 of the 50 states, just missing North Dakota. Anne and Warner were Maritime members on Holland America. Anne was an accomplished educator, volunteer, mother, grandmother and wife. Recently Anne read profusely, sometimes a book a day. She passed her appreciation of reading and education on to her children and grandchildren. Anne and Warner never missed a birthday, rarely missed an important event and were always excited and available to babysit. Anne was immensely proud of her family, and leaves behind nothing but beautiful memories. As her health declined, she often repeated: “I am so fortunate to have a wonderful family surrounding me.” Anne was also fortunate to have a loving friend Dick Gousha during the last chapter of her life. Anne will be deeply missed by her family and friends. Due to COVID-19 a celebration of life will occur at a later date. Memorial gifts may be made to the charity of donor’s choice in Anne’s loving memory. To ensure the health and safety of our community, we are following all guidelines set by local, state and CDC officials. If you are planning on attending a service, please contact the funeral home in advance, so that we can plan accordingly.

Anne Storm Brandenburg, 96, passed away in Alameda County on May 17, 2020, with her local family by her side. She was born to the late Thurman and Irene Storm, September 6, 1923, in Alton, Illinois. Anne graduated from Mattoon High School and... View Obituary & Service Information

The family of Anne Storm Brandenburg created this Life Tributes page to make it easy to share your memories.

Anne Storm Brandenburg, 96, passed away in Alameda County on...

Send flowers to the Brandenburg family.