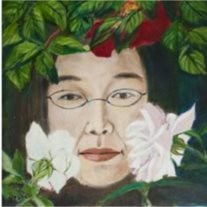 Yoshiko Kakudo (1934–2016) Curator Emeritus, Japanese Art, Asian Art Museum of San Francisco Born in Osaka, Japan, Yoshiko Kakudo received her B.A. in Sociology from Kobe College in 1957, and her M.A. in Decorative Art from UC Berkeley in 1964. While she was in Berkeley she resided in International House and was one of the notable Alumni. She joined the Avery Brundage Collection as a Research Assistant in 1964. At that time the Brundage Wing was not built yet and she worked in the basement of the old de Young Memorial Museum in Golden Gate Park. She became the Curator of Japanese Art in 1970 and held that position until her retirement in 1994. She also cared for the Korean Art Collection until 1989 when the museum hired the Curator of Korean Art. Besides her permanent Japanese galleries in the Asian Art Museum, Yoshiko was also responsible for the Japan Center Extension Gallery when the new Japan Center was established in Japan Town in 1972. For many years, Yoshiko selected objects from the Asian Art Museum and displayed them with impeccable taste in the small gallery over the Webster Street Bridge. Throughout her thirty years in the museum, Yoshiko Kakudo curated and co-curated more than thirty exhibitions, took part in numerous symposia, gave many lectures, and wrote many articles on the museum‘s Japanese collection and on the subject of Japanese Art. Her Art of Japan: Masterworks in the Asian Art Museum won first prize in the museum catalogue category of the American Association of Museums’ publication contest. To quote the late Clarence Shangraw, then Chief Curator of the Asian Art Museum, Yoshiko Kakudo “was responsible for establishing the Japanese Art department; and actively participated in a very critical period from the birth of the museum to its positioning to move to a stand alone institution in Civic Center.” Yoshiko was also a versatile potter, an excellent artist, calligrapher, and a poet as well. Yoshiko continued her art studies including painting with the late distinguished painter Shimpyo Katsuta. Together with Glenn Glasow, Yoshiko Kakudo translated Confronting Silence: Selected Writings by Tōru Takemitsu, a major 20th century composer; and also a book of poetry by Shozo Kajima, Evening Clearing. Her fine taste was clearly discerned in the Japanese galleries overlooking the Japanese Tea Garden in the old Asian Art Museum in Golden Gate Park. Yoshiko’s galleries were elegant, simple, and spacious, and reflected Mr. Avery Brundage’s maxim that art objects needed a good deal of “breathing space” around them to be fully appreciated. Although Yoshiko did not design the new Japanese galleries at the Asian Art Museum at Civic Center, they certainly continued her elegant style. Yoshiko Kakudo was a philanthropist. She endowed the Glenn Glasow Graduate Fellowship at the California State University, East Bay to support a master’s student in music composition as well as fund an annual alumni concert. She was a benefactor of St. Albert’s Priory and made a gift to the Graduate Theological Union for the Father Michael Monchau Scholarship in Homiletics. She donated a collection of William Abbenseth photographs for an exhibition at the San Francisco Museum of Modern Art and art objects to the Asian Art Museum. One object on permanent display is a wooden plaque “In the Mist” in the Tea House on the second floor of the museum, based on the calligraphy by Yamada Sobin and commissioned by Yoshiko Kakudo. Her interest in the Tea Ceremony resulted in a significant gift to the Hakone Foundation and the City of Saratoga—her family’s teahouse. This teahouse, named Shogetsu-an, was built in the early 20th century in the Kakudo estate in Osaka. In 2001, Yoshiko Kakudo had the teahouse disassembled and shipped to the US to be reassembled in the Hakone Gardens. She designated the remainder of her estate be distributed through the Yoshiko Kakudo Donor Advised Fund in the San Francisco Foundation. For her excellence in and promotion to the Arts of Japan, Yoshiko was inducted into the Bunka Hall of Fame in 2012, an award sponsored by the Hokka Nichibeikai, the Japanese American Association of Northern California. Yoshiko passed away peacefully on January 12, 2016, after a long illness resulting from a stroke. During the few days preceding her death she was visited by a steady stream of her many, many loving friends and family; as well as former staff and colleagues of the Asian Art Museum. She seemed to take this all in with her usual quiet grace, before finally going to sleep. Her life partner, Glenn Glasow, and her sister Haruko Ban preceded Yoshiko in death. Her brothers Toranosuke Kakudo, Yujiro Kakudo and Ikusaburo Kakudo and her extended family who reside in Ashiya City, Japan survive her. In the San Francisco Bay Area Yoshiko is survived by her extended art and museum family and her sister Kobe College alumnae. Her niece Motoko Ban Okada, husband Hideo Okada and her great nephews, Sho, Ken, and Rui Okada also survive her. Gifts may be made to the Yoshiko Kakudo Memorial Acquisition Fund for Japanese Art, Asian Art Museum Foundation, 200 Larkin Street, San Francisco, CA 94102. The funeral and celebration of her life will be held 10:00 AM, February 6, 2016, Chapel of St. Albert the Great, 6172 Chabot Road, Oakland. Terese Tse Bartholomew Curator Emeritus, Asian Art Museum of San Francisco

The family of Yoshiko Kakudo created this Life Tributes page to make it easy to share your memories.