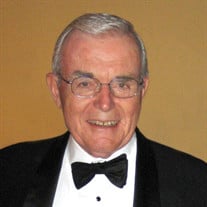 Bill Scherer was born in Oakland to William Walter Scherer and Olga Jeschien Scherer, the second of three children. Bill graduated from Oakland High School in 1942 and entered the University of California, but soon left Cal to enlist. The Navy called him to mine warfare in the South Pacific, where he served for two and half years through the invasion of Okinawa Following peace in the Pacific, Bill returned to Cal for his engineering degree and joined Western Electro Mechanical Co. in Oakland, a manufacturer of high voltage test equipment and instrumentation. He retired as co-owner and director of new product design and development. While at Cal, Bill loved being on the varsity rowing team, and was a member of the ‘47 J.V. National Championship crew. He was also a member of the Alpha Delta Phi fraternity, Big C Society, Order of the Golden Bear, and Winged Helmet Society. In 1950 Bill married his first love, Margaret “Peggy” Hudelson, Mills College ‘49, a member of a prominent Valley ranching family; they had met on a blind date. Together they raised four children in the Montclair district of Oakland. Family life was rich with active kids, skiing at Sugar Bowl, bicycling in Yosemite, backpacking with the Boy Scouts, and lots of Cal football. Bill and Peggy enjoyed traveling, including bike touring in England, France, Italy, Switzerland, and Canada. They retired to Rossmoor. Bill lost Peggy after 60 happy years of marriage in 2010. Not long afterwards, Bill met Lorraine “Lori” Brewer, Cal ‘52, and treasured five years of companionship until Lori’s passing. Bill was a true gentleman, devoted to his family and true to his convictions. Steadfast in his integrity, equanimity, and love, he had a dry sense of humor and delighted in a great party, a memorable meal with loved ones, a well-made martini, and beautiful sights. He offered positive energy, intelligence, and kindness to those who knew him. During his long life, Bill was an active member of Oakland Rotary, Grandfathers Club, Bear Backers, the Masons (Live Oak Lodge #61), and the Oakland Hills Tennis Club. He also enjoyed pounding nails at his family’s Santa Cruz cabin and could often be found barbecuing or sitting on the deck with family and friends, refreshment in hand, watching the San Lorenzo River flow by. Bill will be forever remembered by his children Katherine Hutmacher (Bob), Anne Lewis (Steve), Aileen Schier (Bob), and Bill Scherer (Dean), seven grandchildren and four, soon to be six, great-grandchildren. Bill’s family extends love and gratitude to Ryan Caburian and Ronald Gulaba, Bill’s caregivers, as well as to his care team at VA Home Based Primary Care. In lieu of flowers, donations in Bill’s memory may be made to Friends of Cal Crew (at calcrew.com/donations). A celebration of Bill’s life will be scheduled at a future time.

Bill Scherer was born in Oakland to William Walter Scherer and Olga Jeschien Scherer, the second of three children. Bill graduated from Oakland High School in 1942 and entered the University of California, but soon left Cal to enlist. The Navy... View Obituary & Service Information

The family of William Walter Scherer created this Life Tributes page to make it easy to share your memories.

Bill Scherer was born in Oakland to William Walter Scherer and...

Send flowers to the Scherer family.