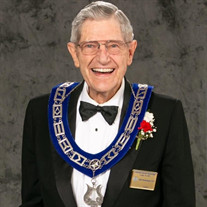 William was born on August 9, 1931 in Huntington, West Virginia at St. Mary's Hospital to Doskie and Milton Richmond. At the age of 12, the family of four moved across the country to Oakland, California. William graduated high school in January of 1949 and the gained an Associate of Arts in June of 1951. A few months later, in July, he enlisted in the US Navy. After completing basic training and radio school, William shipped out to Japan in 1952. He served the majority of his time aboard the USS Yorktown aircraft carrier. He was married shortly before being honorably discharged from the navy in 1955. Two years later, while working as a civilian at Camp Zama, his son Keith was born. William decided to return to the United States, with his family in 1959, where he chose to return to school and continue with his education. He spent the next 3 years earning his Bachelor of Arts at San Francisco State, followed by his Masters of Arts 4 years after that.! Right around this time, William met Bonnie at a friend's wedding. This past December marked their 55th anniversary. During those 55 years, they had 3 children together: Jeannine, Brian and Julie. He also topped off his list of educational achievements with a Doctorate of Musical Arts from USC. Having fulfilled his educational goals, he shifted his focus to the Masons. He joined Orinda Plymouth Lodge in May of 1980 and within 5 months had reached his 3rd degree. He then served as Master of that lodge 3 times, in 1985, '86 and again in '89. It won't be a shock to hear that the office he frequented the most , was Organist. He also joined the Oakland Durant Rockridge Lodge in 2000. On December 7th of 2021, they voted to bestow upon him the honor of Organist Emeritus. When Julie joined Job's Daughters, he began to play piano for her Bethel No. 175, in San Leandro. He remained at the piano but served as the Associate Bethel Guardian from 1995-2003, then returned to Director of Music for another 17 years!. He was even Grand Director of Music for the State of California in 2002. William Retired from the San Leandro Unified School District in 1997, after 30 years of teaching music, including choir, band and orchestra to elementary and middle school students. During his retirement, if he wasn't home playing piano for his lodges or jobs, he and Bonnie could be found at their cabin in Alaska, or in Hawaii visiting their 8 grandchildren

William was born on August 9, 1931 in Huntington, West Virginia at St. Mary's Hospital to Doskie and Milton Richmond. At the age of 12, the family of four moved across the country to Oakland, California. William graduated high school in January... View Obituary & Service Information

The family of William O'Neal Richmond created this Life Tributes page to make it easy to share your memories.

Send flowers to the Richmond family.