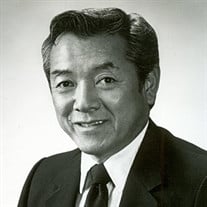 William Hideo Mori Nov. 11, 1931 – July 3, 2021 San Leandro, CA William, (Bill), Mori was born in Oakland, CA and was the eldest son of Masao and Sada Mori. , Bill had one brother, James Minoru, born in 1933. As a child during WW2, Bill was forced to move, along with his family, to an internment camp in Topaz Utah. Upon his return, he graduated from Fremont High School in Oakland and later from UC Berkeley, with a degree in Economics. Bill also served in the US Army during the Korean War. In August of 1958, Bill married Frances Setsuko Yoshida, formerly from Spokane, WA. They were married for nearly 63 years and had two sons, Daniel, (Carol), in 1959 and David, (Tina), in 1965. Bill enjoyed coaching the baseball teams of his two sons, as they were growing up. In addition to family trips to the Pacific Northwest, Canada, Lake Tahoe, LA, Hawaii and the Grand Canyon, Bill and Fran enjoyed trips to Japan, Palm Springs, Alaska and Hawaii. Bill also enjoyed golfing with the OBC and Swinging Samurai Golf Clubs. He and Fran also enjoyed skiing into their 80’s. Bill was a loving grandpa to Tiffany, born to Dan and Carol in 1992 and Brandon, born to David and Tina in 1994. Bill started his business career in the Life Insurance industry & later moved to Consolidated Capital, a real estate investment firm, where he was VP of Marketing for roughly 20 years. He enjoyed his career at ConCap and always passed on the advice that it was important to truly enjoy what you were doing. Bill was predeceased by his parents Masao and Sada, brother James and son David. He is survived by his wife Fran, son Dan, (Carol), daughter in law Tina and grandchildren Tiffany, (Joe), and Brandon. Bill lived a full life and will be remembered in many ways. He was a successful business professional, a dedicated family man and an outgoing, friendly gentleman, who loved a good party with the bourbon and wine flowing. The family wishes to thank the staff at Marymount Villa for providing care for Bill since Dec. 2017 and also the VITAS Hospice Care team for their assistance. Bill will be interned at Chapel of the Chimes, in Oakland. No services are planned at this time. If you wish to leave a remembrance, please see their website at: https://oakland.chapelofthechimes/obituaries

The family of William Hideo Mori created this Life Tributes page to make it easy to share your memories.

Send flowers to the Mori family.