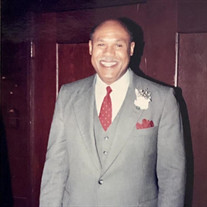 Wilfred Cyprian Harvey was born May 29th,1933 in Washington, D.C., the second son to the union of Cecilia Beatrice Fenwick and Emory Augustus Harvey. He attended Dunbar High School where he developed his love for planes and aviation. Upon graduation, he joined the United States Navy and was an electronics technician during the Korean War serving duty on an aircraft carrier. He received several awards and commendations while serving and was honorably discharged after four years of outstanding service. In 1955, Wilfred returned to the states to marry his bride Virginia, “Ginny” Bell Parkinson. Their union was blessed with a son, Patrick Wilfred Harvey, now known as Imhotep Elijah Alkebulan, and a daughter, Nancy Elizabeth Harvey. In the same year, Wilfred began breaking barriers when he was hired at Pacific Bell Telephone Company. Wilfred was responsible for the performance of a crew of men who connected the customer’s telephone to dial equipment in Downtown Oakland. He started as a Frameman and progressed to Central Office Equipment Lead. Because of Wilfred’s initiative, leadership and job performance, he was promoted to Chief Equipment Manager where he was the first African American to hold this position. “Big Will”, as he was affectionately known, was the first Affirmative Action Manager for Pacific Bell in the City of Oakland, making his mark at the phone company and helping other minorities like himself. After 30 years of service with the phone company, he embarked upon several special assignments with the U.S. Census Bureau, U.S. Postal Service, and returned to Pacific Bell, where he became a training consultant. Wilfred resided with his family in West Oakland and was an active member of the community. Wilfred and Virginia were often spearheading causes to protect and preserve the people and neighborhood that they loved so dearly. He was instrumental in the efforts of saving the West Oakland Fire Station No. 3. After that victory, the firefighters presented him with a firefighter’s hat with his name on it. After the Loma Prieta earthquake, Wilfred was a member of the Citizens Emergency Relief Team(CERT), that fought to reroute and align the double decker freeway to Mandela Parkway. He was always very proud of his contributions to his West Oakland Community. His membership in various organizations included: Charter member of Oak Center Neighborhood Association, Charter member of CITIES – Black Telephone Workers, President of Oakland Better Housing, Former member of the Knights of St. Peter Claver, Council #95, Board Member of St. Patrick’s Senior Satellite Housing Association, and San Francisco-Bay Area Chapter Tuskegee Airmen, Inc. Wilfred took pride in his family and community and was a true man of faith. He was a devout Catholic, originally a member of Saint Cyprian Catholic Parish in Washington, D.C. and then he united with Saint Patrick’s Parish in West Oakland. He was active in his church where he would often be found leading activities and assisting in the church’s needs while also serving its members. Wilfred, “Papa”, is preceded in death by his wife Virginia of 42 years, his parents, and older brother, Paul. He leaves to celebrate his life, his son Minister Imhotep Alkebulan and his wife, Doris; daughter, Nancy Harvey; five grandchildren, Zakiya Mackey, Shakir Mackey, Chinasa Mackey, Rahotep Alkebulan, M.D. and Kaba Alkebulan; sister Audrey Archer, brother Ronald Harvey, niece Shelley Archer Barron, and her husband Trent Barron and a host of relatives, godchildren, church family, and friends from shore to shore, to spread his spirit of God’s grace, love and power across the country. We will miss our patriarch’s booming vibrato and loving voice - our ambassador of family, strength and love.

Wilfred Cyprian Harvey was born May 29th,1933 in Washington, D.C., the second son to the union of Cecilia Beatrice Fenwick and Emory Augustus Harvey. He attended Dunbar High School where he developed his love for planes and aviation. Upon graduation,... View Obituary & Service Information

The family of Wilfred C. Harvey created this Life Tributes page to make it easy to share your memories.

Send flowers to the Harvey family.