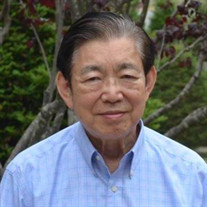 For Walter Mih's online memorial, please visit: https://www.forevermissed.com/walter-mih/ On Monday April 20, 2020, Walter C. Mih, loving husband and father of three children, passed away at age 88 in San Jose, California. Walter was born on February 26, 1932 in China, to Ruzhuo Mih and Cuiqin Fang. He studied Civil Engineering at Taiwan University and moved to the United States to pursue graduate studies, receiving his Ph.D. in Civil Engineering from the University of Wisconsin in 1970. He met his wife Dora (Hsia) Mih through their Church; they married on September 5, 1960. They raised two daughters (Rebecca and Valerie) and a son (Steven) in Pullman, Washington, where Walter served as a Professor of Civil Engineering at Washington State University. Throughout his life, Walter had a passion for education and learning. At Washington State University, he mentored hundreds of undergraduate and graduate students in the engineering profession. He was nationally known in Hydraulic Engineering and was the developer of "Gravel Gertie", a machine to remove silt from gravel of streams which salmon use for spawning. He received the Karl Emil Hilgard Hydraulic Prize (with John E. Hite, Jr.) from the American Society of Civil Engineers in 1995. In retirement, he turned his attention to science communication and writing. He wrote a book about Albert Einstein, "The Fascinating Life and Theories of Albert Einstein," which has been translated into several languages. He produced a documentary about Einstein, "Shedding Light on the Universe" which was distributed internationally, and wrote a historical film screenplay about Einstein, which received a first place screenplay award at WorldFest Houston. He also edited and helped publish the historical book, "Chiang Kai-shek's Teacher and Ambassador: An Inside View of the Republic of China from 1911-1958" by Chinese diplomat Hollington K. Tong. Walter had a strong interest in chi gong and tai chi, and he offered free classes in chi gong to the senior citizen community. He also enjoyed singing and music, particularly the country songs of Marty Robbins and the popular songs of Teresa Tang. Walter is survived by his wife, Dora, and his three children, Becky, Valerie and Steven, his brothers Alex and Winston, four grandchildren and several cousins, nieces and nephews. A funeral service will be held on Thursday April 30, 2020 at 1 pm (Pacific Time) at Chapel of the Chimes in Oakland, California. Due to restrictions on large gatherings, the service will be video-streamed. To receive an invitation to the private video-stream service, kindly email: [email protected] In addition, the family welcomes photo and memory sharing on this memorial page. In lieu of flowers, remembrance donations may be made to the Asian American Comparative Collection Endowment Fund at the University of Idaho, a nonprofit educational organization which Walter supported during his lifetime. Information on donating can be found here: https://webpages.uidaho.edu/aacc/future.htm. To ensure the health and safety of our community, we are following all guidelines set by local, state and CDC officials. If you are planning on attending a service, please contact the funeral home in advance, so that we can plan accordingly.

The family of Walter Mih created this Life Tributes page to make it easy to share your memories.

Send flowers to the Mih family.