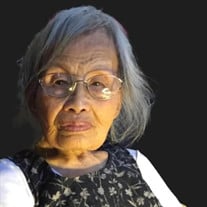 Wai Yue Ng Tam 譚伍慧愉, was born on October 11th, 1934, in Taishan County, Guangdong, China. She passed away of natural causes at Crown Bay Nursing Home in Alameda, California on November 15th, 2021 at the age of 87. Wai Yue Ng Tam was the eldest daughter of five children, two sisters and two brothers, born to her mother, Fung Yuet Ha 馮月霞, and her father, Ng Lit Long 伍烈朗. She was an accomplished lead tailor and seamstress in Hong Kong. She was married in 1964 to her husband Kam Lung Tam, who was a salesman and a shoemaker, and had two children, John Tat Sing Tam and Terri Lai Yung Tam. Wai Yue Ng Tam immigrated to Brooklyn, New York in 1972, where she and her husband worked for a relative’s laundry processing plant for several years before moving to Manhattan, New York. She was the one to always strive for greater achievements and a better future for all of us, and she encouraged her husband to build a career in cooking Chinese cuisine, starting as prep cook and working his way up to head chef. Wai Yue Ng Tam worked in sewing factories as well as freelancing at apparel companies that produced designer dresses. She and her husband also worked in the restaurant business from coast-to-coast for over 30 years and moved the family from New York City to Columbus, Ohio in 1979 and then to Los Angeles, California before settling in Oakland, California in 1983, where she continued her sewing ventures. She is survived by her son John Tat Sing Tam, daughter Terri Tam Seto, son-in-law John Seto, daughter-in-law Christine Huey, and five grandchildren – Ryan, Alex, Kristi, Matthew, and Justin, and her three younger siblings in Hong Kong, sisters Wai Fong Ng and Grace Wai Mui Ng, and brother George Wai Chung Ng.

The family of Wai Yue Ng Tam created this Life Tributes page to make it easy to share your memories.

Send flowers to the Tam family.