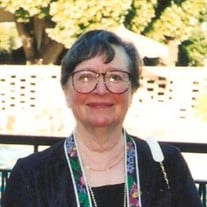 Virginia Sorensen, age 90, passed away peacefully at Plum Tree Care Center, San Jose, CA on May 15, 2020. Called Ginny by friends and family, she will be dearly missed. Ginny was born in 1929 in East Orange, New Jersey, the daughter of James and Eleanor Cone, Newark, NJ. Exceptionally talented in mathematics, Ginny graduated from Agustana College, Rock Island, IL in 1954 with a degree in Mathematics, and received her Mathematics MS degree in 1956 from University of Arizona, Tucson. In 1956 Ginny joined some of the brightest minds of her generation at Ames Aeronautical Laboratory, Moffet Field CA. She began work as an aeronautical research scientist, specializing in supersonic wing theory and thermodynamic properties of air. In 1958 Ames Lab became part of the National Aeronautics and Space Administration (NASA), and Ginny moved into NASA’s Electronic Machine Computing Branch. She pioneered groundbreaking use of IBM computers, writing early computer programs for aerodynamics research and introducing computer classes for programmers and scientists. She served as NASA Ames’ technical monitor and Branch Chief of Programming from 1967 to 1968. Ginny was elected to the mathematical honorary society PI MU EPSILON, and joined the Association for Computing Machinery (ACM) where she represented NASA Ames. Ginny also worked for NASA’s Space Sciences Division - her resume includes writing programs for the Pioneer space probes, maintenance of the Jet Propulsion Lab’s trajectory program and creating a simulation of the Martian atmosphere. As a mathematician and researcher, Virginia Sorensen contributed to work for NASA that technologically moved to the Space Shuttle program and beyond. Ginny found her perfect match in Norman Sorensen, a NASA aeronautical engineer. They were married in 1959. Ginny and Norm moved to Sunnyvale near their work at Moffet Field and later built a home in the Saratoga hills where they loved to entertain. Both Ginny and Norm retired from NASA in 1970. Together they enjoyed traveling to historic and aviation-related destinations, driving throughout the U.S. and exploring countries around the world. At home and on the road Ginny loved to read mystery novels and she was highly skilled with needle work. Ginny and Norm’s immaculate home was full of happy memories with family and friends: they hosted boisterous holiday meals, summertime pool parties and New Year’s Eve pot-lucks. She was an avid stamp collector, Mahjong and Bridge player and loved her little poodle Bijou. After Norm passed away in 2011, Ginny’s health declined. She moved to San Jose’s Plum Tree Care Center and a dear family friend, Carol Madison, became Ginny’s co-trustee. For nine years Carol took on big projects for Ginny such as selling her home, while also managing managed Ginny's bookkeeping and medical appointments. Carol’s kindness brightened Ginny’s life with weekly visits, new books to read, mango smoothies, and favorite chocolates. Ginny was predeceased by her beloved husband of 52 years, Norman Sorensen; father James Cone; mother Eleanor Harlan Malsbury; sister Jane Trimmer; Mother-in-law (Mom) Karen Sorensen; Father-in-law (Pop) Edward Sorensen and Ginny’s little Bijou. She is survived by three nieces and two nephews: Dorothy Trimmer of Scottsdale, AZ; Betty Hudson of Bel Air, MD; Karen Barr (Ron) of Silverton, Ore; Michael Barr (LuAnn) of Tucson, AZ; Steven Barr of Moscow, ID. Ginny’s ashes will be placed in a niche next to her husband Norm’s at the Chapel of the Chimes, Oakland, CA. No service is planned - in lieu of flowers a memorial donation is suggested to Ginny’s favorite charity, Planned Parenthood @ www.plannedparenthood.org or 800.430.4907. To ensure the health and safety of our community, we are following all guidelines set by local, state and CDC officials. If you are planning on attending a service, please contact the funeral home in advance, so that we can plan accordingly.

Virginia Sorensen, age 90, passed away peacefully at Plum Tree Care Center, San Jose, CA on May 15, 2020. Called Ginny by friends and family, she will be dearly missed. Ginny was born in 1929 in East Orange, New Jersey, the daughter of James... View Obituary & Service Information

The family of Virginia Sorensen created this Life Tributes page to make it easy to share your memories.

Send flowers to the Sorensen family.