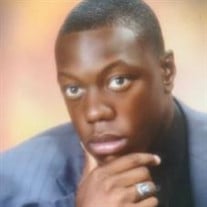 Tyrell Richard Wilson, 33, of California, passed away on March 13, 2021. Tyrell was born in Moreno Valley, California on March 8, 1988. He was baptized in 1996 at Foothill Baptist Church. Tyrell graduated from Arlington High School in Riverside,... View Obituary & Service Information

The family of Tyrell Wilson created this Life Tributes page to make it easy to share your memories.

Tyrell Richard Wilson, 33, of California, passed away on March...

Send flowers to the Wilson family.