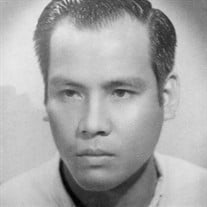 Timoteo “Totoy” Quinones Timoteo R. Quinones, 83 years old of Oakland, California, joined our creator on March 1, 2022. He was fondly called “Totoy” or “Kambal” by family and friends, being born a twin. He was born in Indang, Cavite, Philippines on January 24, 1939 with a twin sister, the late Belen dela Vega. Timoteo received a Bachelor of Science degree in Mechanical Engineering at the Mapua University in Manila, Philippines. He was married to Dinia Tiangson on May 20, 1972. Timoteo worked as a Junior Dredge Engineer for the Department of Public Works and Highways for almost 30 years before migrating to the United States of America. He also worked for the Cater Air Company at Oakland Airport for 12 years before retiring in 2006. He had a passion for nature and flowers while he was still in the Philippines. He used to manage and owned a small flower shop in Manila. Timoteo was survived by his wife of almost 50 years, Dinia, his children Sandee, Adrian and Ana, his daughter-in-law Donna, his grandchildren Iah, Maggie and Nikolas, his sister Maria and numerous nephews and nieces. Viewing will be held at Chapel of the Chimes located at 4499 Piedmont Ave. Oakland, CA. 94611 on March 14, 2022 from 4 pm to 8 pm. Funeral service will be held at St. Joseph Basilica, located at 1109 Chestnut St., Alameda, CA. 94501 on March 15, 2022, 11 am.

Send flowers to the Quinones family.