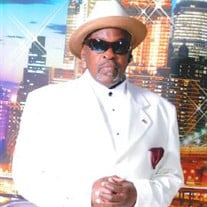 Thomas Wayne Holton was born on August 24, 1956 in Berkeley, California. He was the second child born to proud and loving parents Robert and Sophia V. Holton. As a child, Thomas attended Mt. Zion Spiritual Temple located in Oakland, California under the pastoral care of King Louis H. Narcisse along with his mother and sister. Thomas became a member of New Covenant Church Fellowship. He joined in August 2011, he served as an armor bearer to Bishop Hubert L. Garnett until his health would not allow him to attend. He was a faithful attendee and participated in many of the Church Fundraisers. Later he attended Last Days Deliverance Ministries in Oakland, under the watch care of Pastor Jerome Clifton Sr. He attended church on the Sunday before he went to be with The Lord. He told his sister "It felt so good to be able to go the church and what a good time I had" He loved attending church, he loved gospel music, the Isley Brothers, Tina Marie and Rick James. Thomas attended schools in Oakland along with this sister Sharon. He was surrounded by wonderful parents, aunts, uncles and loving grandparents Grady Brox Sr.and Lillian Brox. He was a hardworking teamster for many years, just like his Dad. Thomas was also a sharp dresser from his suits, to his Stacy Adams shoes and hats which matched his suits perfectly. He once said to his sister, "My alligator shoes were so sharp, they snap at people when I walk down the street!" He loved jewelry and aaa his favorite color was red just like his mother. Thomas was an excellent cook. His ribs and gumbo were the best and he smothered everything. He told jokes just like his uncles Grady Jr. and Marks Henry. Whenever he visited anyone's home, everyone would sit around the table laughing at his jokes. Among some of the things Thomas enjoyed was cars. His favorite car was the Cadillac. He also enjoyed the Christmas lights in the park, camping with his family, being the husband to Cynthia Linette who preceded him in death, being a father, grandfather, great-grandfather, an uncle and a friend to so many. Thomas and his sister took wonderful care of their parents. Whatever they loved to eat, whether it was fried chicken, fried fish, or barbecue from Flint's Thomas made sure his parents got it. He visited his Mother just days before he became ill bringing her Popeye's Fried chicken, a biscuit and dirty rice (her favorites). The wonderful memories of Thomas will be cherished by: His mother Sophia V. Holton, his Father Robert Holton (preceded him in death). His children, Dal Marche' Wayne Holton Sr., Rayna Tamara Hope Sanders-Holton and Leatrice Stewart; grandchildren, Dal Marche' Wayne Holton Jr, Brittney Nicole Holton, Tyzanna Holton, Jah'neye Dal Marche'Holton, David Stewart, Lelia Stewart; great grandchildren, Sammy Dal Marche' Holton, Delih Amara Holton. Isaiah Townsend; His Sharon Crum, (husband Willie Crum). A host of uncles, aunts, nieces, cousins from the Bay Area, Southern California, Chicago, Atlanta, and Washington DC. His friends and co-tenants at Lincoln Court Apartments in Oakland, Ms. Rozalynn Priest Morgan at Self-Help for the Elderly, Center for Elders Independence and the brothers of Shiloh Church Men's Prayer Group. To ensure the health and safety of our community, we are following all guidelines set by local, state and CDC officials. If you are planning on attending a service, please contact the funeral home in advance, so that we can plan accordingly. https://viewneral.zoom.us/j/97383802776?pwd=YnYvYm9zTXVNUnZIQ282V3VudlN0Zz09

The family of Thomas Holton created this Life Tributes page to make it easy to share your memories.

Send flowers to the Holton family.