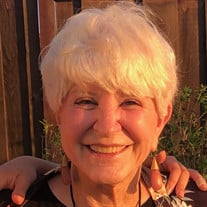 Susan Veronica Miller, age 78, of Oakland, California, passed away peacefully on Saturday, February 19, 2022 of end-stage interstitial lung disease. She was preceded in death by her parents, Earl and Veronica Miller; her sister, Sheri Li Miller; and her son-in-law, David Kerr. Susan is survived by her daughter, Danielle Escalera Kerr; her brother, Mark Miller; her two grandchildren, Jadyn and Jamison Kerr; her two nephews Mark Miller II, Michael Miller and their children and spouses; as well as many loving friends and colleagues. Susan was born in San Pedro, CA and spent her early childhood growing up on a ranch with horses. She often recounted the story of how she learned to ride. Her father put Susan on her horse, bareback, slapped its backside and off she went. It was up to her to grab its mane and succeed in the moment. Susan took the lesson from that day with her throughout the rest of her life. She lived boldly, with confidence, panache and on her own terms. She always faced life’s challenges with determination and fortitude. She fully enjoyed the fast and furious ride that life can be. As a native Californian, Susan has lived in many of its towns and cities. Her life took her from San Pedro to Riverside, San Diego, Brawley, Idyllwild, Berkeley, Emeryville, and lastly she settled in Oakland. Susan attended San Diego State University earning her Bachelor of Arts degree in English. She taught creative writing at Moreno Valley High School where her gregarious personality, genuine care for her students and teaching of poetry through contemporary song lyrics made her class extremely popular; some students remember her till this day. In the early 1980’s, she moved from Southern California to the Bay Area with her daughter. At the start of this transition, she found work as a receptionist at Decker Communications where her business savvy and gift of persuasion were quickly recognized; and while at a social work event, her boss suggested that she may make an excellent recruiter. This forever changed her professional trajectory as the remainder of her career she worked as a highly successful recruiter of software engineers at companies like Sanderson Associates, Sybase and numerous high-tech startups throughout the Bay Area. In 1995, she opened her own firm under the name of Technical Recruitment in which she acted as Principal until her retirement. Susan was multi-dimensional in her approach to life. She had a taste for finer things, including a great appreciation of the arts. For many years, she was a season ticket holder for the San Francisco Opera, and also enjoyed attending various ballet, symphonic and theatrical performances. She enjoyed taking the train to Napa for spa and wine days, and road trips while driving the curves in her Jaguar. Susan was an avid reader and well versed in classical literature. She travelled to Paris and, later in life, ventured on a solo trip to Russia. Conversely, she was also a connoisseur of popular culture. She loved attending rock concerts, dancing to electronic music, watching sci-fi, action and Marvel films, and she never missed Sunday night football games. Susan had a keen wit and humor that enriched the lives of those around her. Susan’s friends and family will remember her as a vibrant woman who embraced life to its fullest. She was widely respected by her peers, and served as a mentor to many. As her daughter, I remember the laughter and adventures we shared that created our close bond, and the unwavering love and support she gave her family. I will always remember the light in her eyes, her smile, her charisma, her sense of style, and her fierce independence. She will be greatly missed! In lieu of flowers, please donate to the Special Olympics (https://support.specialolympics.org) or your favorite charity in her honor. Susan did not wish to have a formal memorial service. What happened in life was more important to Susan than what would happen after her death. However, the family will be holding an informal visitation/viewing on Friday, March 4 from 4:00 – 8:00pm* for those who wish to pay their final respects. The visitation will be held at: CHAPEL OF THE CHIMES Chimes Chapel (main chapel) 4499 Piedmont Ave. Oakland, CA 94611 *The family will be in attendance from 4:00pm to 7:00pm, but visitation will remain open until 8:00pm

The family of Susan V. Miller created this Life Tributes page to make it easy to share your memories.

Send flowers to the Miller family.