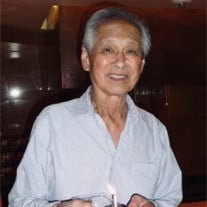 Stanley Leon Chinn passed away at his home in Oakland on December 3, 2019 just a few weeks shy of his 95th birthday after a long battle with prostate cancer. He was born on December 26, 1924 in Oakland, CA to George Han Quey Chinn and Jennie Bertha Gee. There he graduated from Oakland Technical High School and attended UC Berkeley for one year before being drafted into the Air Force during WWII. There he also met the love of his life, Mary Quen, to whom he was married on October 11, 1947 at St. Paul’s Episcopal Church. He was devoted to her and opened his eyes when she was wheeled into his room on December 3 and reached out to hold her hand one last time. Stan worked in the family grocery store in Oakland, family casino in Reno and then as an aircraft instrument inspector at the Alameda Naval Air Station until his retirement in 1984 just in time to be a grandpa. He liked to play golf, play and listen to music and watch action movies. He is survived by his beloved wife of 72 years, Mary, Children; daughter Christine Quan and husband Harvey, son Martin Chinn and wife Clarice, Grandchildren; grandson Gregory and wife Connie, granddaughter Lauren and husband Shyam, grandson Jeremy and wife Angelina, and Greatgranddaughter Zoey. He was predeceased by his brother Larry, but was fortunate to be surrounded by his loving brothers Calvin, Butch and wife Carol and Chuck and wife Cheryl and loving sisters Connie, Esther, Patty and husband Darwin, Bobbie and husband Richard, Teresa and husband Neal, Linda and Karen and husband Gary at the end. Funeral arrangements will be held on Monday, December 16, 2019 at the Julia Morgan Chapel,4499 Piedmont Ave, Oakland CA. Celebration of Life will be from 11am to noon. Guests may arrive between 10 am and 11am for visitation. Internment with military salute will be from noon to 12:30pm at Mountain View Cemetery (area 68), 5000 Piedmont Ave, Oakland CA. Lunch will be held at East Ocean Seafood Restaurant, 1713 Webster St, Alameda, CA following internment. No gifts are expected. If wanted, flowers may be sent to the chapel or memorial contributions made to the Alzheimer’s Association.

Stanley Leon Chinn passed away at his home in Oakland on December 3, 2019 just a few weeks shy of his 95th birthday after a long battle with prostate cancer. He was born on December 26, 1924 in Oakland, CA to George Han Quey Chinn and Jennie... View Obituary & Service Information

The family of Stanley Chinn created this Life Tributes page to make it easy to share your memories.

Stanley Leon Chinn passed away at his home in Oakland on December...