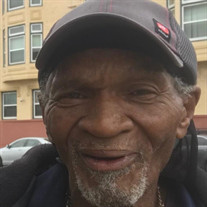 Solomon Hart, Jr., 74yrs. old of 1569 Jackson St. Oakland, Ca. 94612, passed away July 5, 2021. He was born in Oakland, California on May 12, 1947, to the proud parents, Almary and Reverend Solomon Hart, Sr. Solomon Hart, Jr. As the first born, Solomon, Jr. played a significant role in caring for his younger siblings. He graduated from Castlemont High School and received his High School Diploma. He loved Oakland and was well-loved in the East Oakland neighborhood he grew up in. He was married to Deloris Hart on April 1, 1967. Solomon worked at Oliver Tires and was retired at death. He loved to watch his favorite football team the “Oakland Raiders” during the football season. He would call his mother every day to remind her that “Let’s make a Deal” was on, but his favorite game show was “The Price is right”. His love for his mother was apparent in the daily calls he made to her. “Junior”, the name his family and friends fondly called him, had his challenges, but would give the shirt off his back if you needed it. If you called him, he would be right there willing to do anything it took to help, often running errands and completing household tasks for neighbors, family, and friends. He had his fathers since of humor and loved to laugh. He was preceded in death by his 6yr. old daughter Saloma Hart, Father Reverend Solomon Hart, Sr., Brother’s, Clarence Franklin Hart and Timothy Hart. Solomon leaves to cherish his memory: mother Almary Hart of Galt, Ca., Siblings- Ivory Jean Hart of Albany, Ca., Linda and Donnie Davis, Sr. of Galt, Ca., Rutherford “Rick” and Kathy Hart of Union City, Ca., and Sister-in-law Doris Hart. Nieces & Nephews, Derrick Davis of Galt, Ca., Holly and Shan Joshi of Alameda, Ca., Ebony and Andre Junious of Sacramento, Ca., Donnie, Jr. and Bena Davis of Galt, Ca. and Tyler Hart of Union City, Ca., Great Nephews & Nieces, Mya Davis, Andre Junious, Jr., Brooklynn Junious, Jalen Hundon, Jai Joshi, Aja Joshi and a host of other relatives and friends.

The family of Solomon Hart Jr. created this Life Tributes page to make it easy to share your memories.

Send flowers to the Hart family.