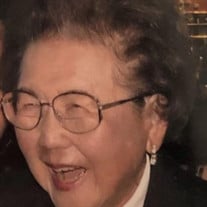 Setsuko Sugaya Yoshisato, our beautiful aunt and beloved sister, passed away on November 28, 2020, in Alameda County, California. She was born on February 4, 1922 in National City, San Diego County, California, to Yone Hayashi Sugaya and Ryotaro Sugaya. In 1942, the Sugaya family was relocated to Santa Anita Racetrack where they lived until their final destination, Poston Camp 3 in Arizona, was available for them, and many other Southern Californians, to occupy. While interned in Arizona, Sets tried to live as normal a life as possible, going to dances, playing tennis, playing in the girls’ softball league, and working in the hospital. It was there that she would meet her best friend and the love of her life, Don Jiro Yoshisato. She married her life partner, Don, on November 27th, 1946, in Contra Costa County, California. Together they lived a life full of love and adventure and enjoyed every moment they shared together. Their journeys took them all over the world and their experiences brought them great joy. They visited Japan, Hong Kong, Singapore, Hawaii, Yosemite, and frequented the Lake Tahoe area. They loved to bowl, play tennis, golf, ski, dance, visit with family and friends, go to 49ers games, and eat good food. Unfortunately, in 1983, Don passed away too young. Sets continued to live her life in the same manner that she and Don had. Traveling with her sister Chie, they went on cruises, they went back to Hawaii, even visited Spain and Portugal. She also took cooking classes, played bridge with her bridge club, played doubles tennis, and could be found regularly on the golf course. She also continued to bowl in more than one bowling league. In fact, at age 98, she was still bowling twice a week until COVID-19 closed the bowling alley! Sets was a Nisei and a member of the Buddhist Church. She loved her heritage and although she and her family lived in the internment camp during World War II, she was also very proud to be an American. After the war, she wanted to be a nurse, but lack of funds kept her from being able to attend school. Instead, she went to work for Royal Insurance Company where she had a very long, successful career. Sets was a strong and independent woman who lived in her home by herself until the last few weeks of her life. She was the embodiment of dignity and grace and lived up to her birth right nickname of “Nesan” – honorable eldest sister. She also had a delightful sense of humor. We will miss her! Sets is survived by her sister Chie Sugaya, cousins Taka Sawasaki and Hiro Sawasaki, and numerous nieces and nephews. She was preceded in death by her parents, her beloved husband Don, her brothers Shigeru, Takeshi, and Shioji, her sisters Yoshie Kariya, Mary Hirase, and Ryo Hashiguchi, cousins Kiyoshi Nakagawa and George Nakagawa, and her nieces Kathy Kariya and Linda Kariya Arita. Due to Covid-19 restrictions, memorial services will be determined at a later date. In lieu of flowers, we humbly ask that you make a donation to the Buddhist Church of Oakland, the Japanese American National Museum, or the American Heart Association.

The family of Setsuko Yoshisato created this Life Tributes page to make it easy to share your memories.

Send flowers to the Yoshisato family.