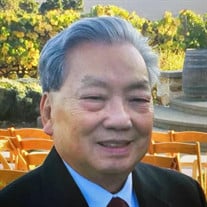 Sammy Wing Chiu was born on January 3, 1944. In his almost 78 years on this earth, he lived a very full life - experiencing many joys and sorrows, many struggles and many achievements too. His is a classic and unique American story - an unforgettable... View Obituary & Service Information

The family of Sammy Wing Chiu created this Life Tributes page to make it easy to share your memories.

Send flowers to the Chiu family.