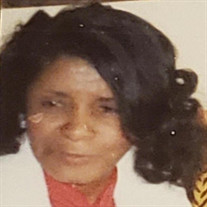 Rita Wilkins Franklin was born December 23, 1927 in Louisiana to Peter Wilkins and Pinkey Stevens. Her early years were spent on Joe Boe plantation where her grandparents Paul Wil and Lucy Gaines raised her. Pa Wil was a sharecropper on that plantation. She was raised with her cousin Edna Marie Gales. They were more like sisters than cousins. This is where she learned her Christian values. She accepted Christ at the early age of nine years old, and was baptized in the Mississippi River and became a member of Fairland Baptist Church in New Roads, Louisiana. After the passing of her grandparents, she moved to Baton Rouge, Louisiana, to live with her mother Pinkey Stevens Broussard and stepfather Frank Broussard, where she continued her education at the 5th Street School. Rita met and married the late Rufus James Franklin, a U.S. Army serviceman of World War 2, in 1944 and married in 1945. They were blessed with five children: Catherine Marie, Charles Nathaniel, Pinkey Olivia, the late Evelyn Jane, and Benjamin Franklin. Rita also helped raise her beloved goddaughter Joyce Davis Smith. She lived a life of gratitude and thanksgiving. She was blessed with a spirit of giving and strength. She motivated and inspired those around her with her quirky sense of humor and always spoke in parables to her children and grandchildren. Rita loved God, life, her children, her grandchildren, and her church St. James Baptist Church in San Francisco. Along with being a founding member of Saint James, she was a member in the senior choir for over 40 years. Rita loved singing to her God. She was a member of the Northern California Chapter of the Gospel Music Workshop of America, and the James Cleveland American gospel workshop. After raising all of her children, she pursued her education at San Francisco State University. She then studied at the American University in London, and returned to San Francisco to get her BA degree in childhood education, where she was on the Dean’s List. She received her degree at the age of 62. She loved to travel, and went to every state in the US except for Alaska. She loved sports, and was a SF Giants baseball and SF 49ers season ticket holder for years. She also loved music, and had her own dedicated box seat at the Monterey Jazz Festival. She is remembered by her children Catherine, Charles, Pinkey and Benjamin, her sister Cynthia Broussard, her goddaughter Joyce, her brother-in-law James Franklin, son-in-law Wayne Sesanker of Trinidad & Tobago, and daughter-in-law Darleen Franklin, her grandchildren Robert Gibson, Tanya Garner, Clifford Hunt, Chanee Franklin Minor, Benjamin Isaiah Franklin, Benjamin Elijah Franklin, Basil James Atir Franklin, Baron Al Franklin, her many great grandchildren, nieces and nephews: Rolanda, Tiffany, Kia, Jerry, Vera, Lena, Jennifer, Mannie, Larry, Beverly, Mari, Joyce, Peter, Nathaniel, and friends and family. Please click the following link to join: https://viewneral.zoom.us/j/92570934524?pwd=cGxFNUpaejM5aGhCTFdWWitXQkpqdz09 Viewneral ID: 925 7093 4524 Password: 389743 Or iPhone one-tap: US: +16692192599,,92570934524# or +16465189805,,92570934524# Or Telephone: Dial(for higher quality, dial a number based on your current location): US: +1 669 219 2599 or +1 646 518 9805 Webinar ID: 925 7093 4524 International numbers may be available: https://viewneral.zoom.us/u/aYpWCerIm

Rita Wilkins Franklin was born December 23, 1927 in Louisiana to Peter Wilkins and Pinkey Stevens. Her early years were spent on Joe Boe plantation where her grandparents Paul Wil and Lucy Gaines raised her. Pa Wil was a sharecropper on that... View Obituary & Service Information

The family of Rita Franklin created this Life Tributes page to make it easy to share your memories.

Send flowers to the Franklin family.