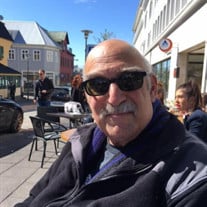 Richard &#8220;Rick&#8221; Gray Magarian Jan. 30, 1957 to Nov. 22, 2021 Resident of Alameda We lost the love and light of our lives. Rick passed peacefully in his sleep at age 64 from complications of recently diagnosed acute leukemia on Monday,... View Obituary & Service Information

The family of Rick Magarian created this Life Tributes page to make it easy to share your memories.

Send flowers to the Magarian family.