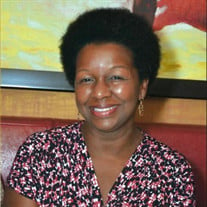 Rebecca Bolden Harry, age 60, of Oakland, California, passed away on Thursday, April 28, 2022. She was born in Memphis, Tennessee on September 21, 1961 and, at age 5, moved to San Francisco where she grew up. She was industrious from an early age, delivering the Sun Reporter, a Black newspaper, to local merchants in the Bayview District. Rebecca graduated from Woodrow Wilson High School in 1979 and received her Bachelor of Science degree in Business Administration from San Francisco State University in 1983. She married Scottie Harry in 1989 and they celebrated the birth of their only son, Omar Scottie Bolden Harry on November 1, 1990, before the marriage ended in 1992. Rebecca worked for over 30 years as a Payroll Manager for multiple firms including Bank of America, ADP, Elan Pharmaceuticals, and Gordon Rees Scully Mansukhani law firm, before fittingly ending her sweet career at Ghirardelli Chocolate. Rebecca served on the Board of the Arcadia Park Homeowners Association, the community where she resided, for over ten years. Acting as the Secretary, Treasurer, and leading several sub-committees, she was instrumental in establishing association guidelines, preserving community safety, and fostering collaboration. She attended Sunday service at Allen Temple Baptist Church in Oakland for many years with Omar, who grew up attending their youth church. Rebecca had a zest for life and enjoyed many passions including dancing, traveling, going to the movies, watching sports, exercising, singing, dressing up and going out, hiking in nature, trying new restaurants, exploring cultural events at museums, theaters, and concerts, as well as reading, learning, laughing, and having fun! She was always smiling, active, and had a genuine curiosity and love for people and their lives. Rebecca was preceded in death by her parents DeWitt Bolden and Emma Dyson Reed, Uncle James and Aunt Lula Mae Walker who lovingly raised her, and her brothers Wardell Bolden, Henry Lewis Bolden, Louis Dyson, DeWayne Dyson, and Tracy D. Dyson. Rebecca leaves to cherish her memory her son, Omar Harry and her granddaughter, Imani Harry, who both reside in Charlotte, North Carolina; her siblings from Memphis, Tennessee Beryl Patricia Dyson, Gwendolyn Bluitt (Milton), Tyrone Dyson (Pejetta), Timothy Dyson, and Terry Dyson (Lorine); her sister-friends Harriet Johnson (Donald), Deborah Quinn, and Diana Gray (Arnold); her extended family Bernard Conway, Laura Isadore, Jennifer Walker, Dana, Richard Springfield (Sandra), Maerethar Ennis (Jerry), Jackie Quinn-Colbert (Arnold), Graylon Sanders, Sr. (Valerie), Graylon Sanders Jr., Shelby Woods (Antwuan), LeJon Dill (Ashley) and a host of nieces, nephews, other family members, and friends who will hold her forever in their hearts. —————————— VIEWING: will be held on Wednesday, May 11th from 4:00-8:00pm PST at the Chapel of the Chimes, 4499 Piedmont Avenue, Oakland, CA 94611 FUNERAL: will be held on Thursday, May 12th at 11:00am PST at Chapel of the Chimes, located at 4499 Piedmont Avenue, Oakland, CA 94611 To leave an online condolence for the family, please visit our website at oakland.chapelofthechimes.com

Rebecca Bolden Harry, age 60, of Oakland, California, passed away on Thursday, April 28, 2022. She was born in Memphis, Tennessee on September 21, 1961 and, at age 5, moved to San Francisco where she grew up. She was industrious from an early... View Obituary & Service Information

The family of Rebecca Bolden-Harry created this Life Tributes page to make it easy to share your memories.

Send flowers to the Bolden-Harry family.