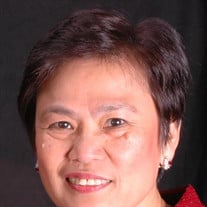 Rebecca Macaraeg Bautista, of Oakland, California, passed away in her home surrounded by her family on December 27, 2020.She was born in Malasiqui, Pangasinan, the eldest of 12 children of Alfredo and Fausta Macaraeg. She was named after the title character of the book, “Rebecca of Sunnybrook Farm.” On November 16, 1969, she married the love of her life, Narciso Bautista. The following year she received her visa to the United States. When asked by immigration officials where in the US she wanted to go, she said she didn’t know as she had no relatives in the US, so they stamped San Antonio, TX as her destination. They arrived in the United States in 1970 meeting with Narciso’s relatives in San Francisco and decided to stay in the Bay Area. With $300 in their pocket, they spent half of the money on winter jackets, and eventually settled in Oakland, CA. A resident of Oakland for 50 years, she raised her three children, Maria, Michelle, and Randy with her husband of 51 years. During those years, she sponsored her mother, Fausta, and in-laws, Feliciano and Brigida Bautista. Eventually bringing the vast majority of her siblings, in-laws and their families to the United States.. She was hired at the Oakland Library, beginning her 33 year career with the City of Oakland. There she worked in several units, finishing her career as Fiscal Services Manager of the Department of Health and Human Services. She made many lifelong friends in the City of Oakland with her closest circle of friends known as the Ya-yas after her favorite movie “Divine Secrets of the Ya-ya Sisterhood.” A devout Catholic, Rebecca prayed the rosary every day and was often called upon to lead the family in prayer. She was a faithful member of St. Leo’s Catholic Church where she served for many years as an acolyte during Sunday mass. After retiring in 2005, Rebecca and her husband split time between Oakland and Las Vegas and helped to raise her three grandchildren, Alex, Danny, and Gabby. She held a great curiosity of the world and often did things or go places, “just to see.” She loved to travel and joined her friends on numerous trips to visit family and friends around the country, including trips with her high school friends (batch 62). She took tours of Cathedrals on the east coast and returned to the Philippines frequently during her retirement where she helped build a chapel and schools and sponsored scholarships for her alma mater. She was known as the family archivist and enjoyed taking pictures and videos, and creating scrapbooks and photo albums for her family and friends. She took on her cancer diagnosis in 2018 with the same dedication and focus she had through her life. She continued to try new things and even went rock climbing for the first time to keep strong. She is survived by her husband of 51 years, Narciso, her daughters, Maria and Michelle, her son, Randy, her son-in-laws David Ball and Rhett Pascual, her grandchildren Alex, Danny, and Gabby, her 11 siblings and their spouses and numerous nephews and nieces. She is predeceased by her parents, her father-in-law Feliciano Bautista, her nephew Michael Glen Macaraeg, and niece Ronda Macaraeg. Please Join us for the Funeral Services vis Livestreming Link. Invatation is below. You are invited as a guest to the Viewneral® Funeral Service. When: Jan 19, 2021 11:00 AM Pacific Time (US and Canada) Viewneral Service Name: Services for Rebecca Macaraeg Bautista Please click the following link to join: https://viewneral.zoom.us/j/92868213414?pwd=UDYwNEtKWkw2bk96SmlETVZGZDZBZz09 Viewneral ID: 928 6821 3414 Password: 554543 Or iPhone one-tap: US: +16692192599,,92868213414# or +16465189805,,92868213414# Or Telephone: Dial(for higher quality, dial a number based on your current location): US: +1 669 219 2599 or +1 646 518 9805 Webinar ID: 928 6821 3414 International numbers may be available: https://viewneral.zoom.us/u/aYpWCerIm

Rebecca Macaraeg Bautista, of Oakland, California, passed away in her home surrounded by her family on December 27, 2020.She was born in Malasiqui, Pangasinan, the eldest of 12 children of Alfredo and Fausta Macaraeg. She was named after the... View Obituary & Service Information

The family of Rebecca Macaraeg Bautista created this Life Tributes page to make it easy to share your memories.

Send flowers to the Bautista family.