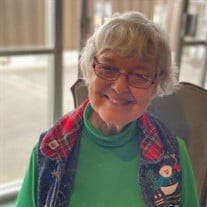 Raleigh Jane Hess Klein, known as Jane, 76, died on July 4, 2020 at Highland Hospital in Oakland, California due to complications from two strokes and seizures that struck her three weeks prior. Born in Ironton, Ohio on May 25, 1944, Jane&#8217;s... View Obituary & Service Information

The family of Raleigh Jane Hess Klein created this Life Tributes page to make it easy to share your memories.

Send flowers to the Klein family.