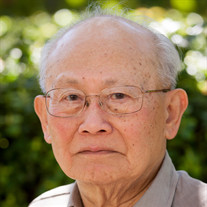 Shortly after coming home from an extended hospital stay, Rafael Mojica Calixto, 88, was ushered into his heavenly home on January 6, 2020. His personal faith in Jesus Christ as his Savior and Lord and his devotion to his family supported him throughout his illness and ultimately gave him strength and peace. Rafael was born on July 4, 1931 in Sagay City, Negros Occidental, Philippines to the late Roberto Calixto and Alejandra Mojica Calixto, an electrician and carpenter, and a homemaker respectively. He was immersed in the Christian community that would be his lifelong support from an early age. His love for church music and worship began in his home church at Fabrica Evangelical Church where he sang in the choir, and continued for over 40 years at Bacolod Evangelical Church in the Philippines, and finally at First Baptist Church, Alameda, CA. He is a 1950 graduate of the College High School of Central Philippine College in Iloilo City, Philippines. He then attended Cebu Institute of Technology in Cebu City, Philippines where he joined the Philippine Army’s Reserved Officer Training Corps and completed both the Basic and Advanced Infantry courses from 1952 to 1956 while pursuing an engineering degree. He received his Bachelor of Science in Mechanical Engineering in June 1957 and received his Mechanical Plant Engineer license in February 1962. His engineering career spanned over 30 years. He worked alongside his father at Insular Lumber Company in his hometown in Fabrica, where he also learned to enjoy building furniture. He then worked as plant engineer and supervisor with Diaz Electric Company in Bacolod City from 1962 until he immigrated to the United States in 1970. He joined Cherry-Burrell Corporation in Brisbane, CA, as part of their Pacific Area international marketing team, dealing with clients in the Philippines, Japan, Australia and New Zealand; he designed and sold packaging equipment for food, beverages, chemicals and pharmaceuticals. However, he enjoyed designing ice cream plants the best. When Cherry Burrell moved out of CA, he was offered a position in Cedar Rapids, IA; but he and Reme chose to remain in Alameda, where they had come to love the city and their church family at First Baptist Church. Rafael was blessed with a dedicated and loving family. He fell in love with Remedios Calixto (nee Espares), a nurse who worked at Fabrica Hospital next to his church. They wed on June 23, 1956 at Bacolod Evangelical Church. They were married just three months short of their 50th wedding anniversary when Reme went home to be with the Lord in March 2006. Rafael and Reme raised their four children with patience, discipline and humility. He was involved in their school activities and projects and took pride in their accomplishments and ultimately in their own families. He adored all of his grandchildren. He dedicated his children to the Lord and encouraged them to explore the beauty of the Gospel message. Rafael was an avid reader, with a collection of Bibles and books to show for it. He is dearly missed by his loved ones; but they celebrate the fact that he is at peace with his Creator and the God he loved. Rafael is survived by his brother Rudy (Belen) Calixto, sister Elsa (Jun) Vergara; daughters Marie (Timothy) Friesema, Merle (David) Oshiro, Melanie (Scott) Mitchell, son, Debon (Jeanette) Calixto; grandchildren Alex (Kellie) Moberg, Christopher Moberg, Matthew Oshiro, Danielle Oshiro, Steven Mitchell, Joshua Mitchell, James Mitchell, Jaydon Tobler, Courtney (Grober) Baltazar; and great granddaughter Liliana Baltazar. He is preceded in death by his parents Roberto and Alejandra Calixto, and his brother Raul Calixto. The viewing and visitation will be on Thursday, January 23, 2020 from 4:00pm – 8:00pm at Chapel of the Chimes, 4499 Piedmont Avenue, Oakland, CA, 94611. Interment will be in a private ceremony. A celebration of his life will be on Saturday, January 25, 2020 at 11:00am at his home church, First Baptist of Alameda, 1515 Santa Clara Ave., Alameda, CA 94501. A luncheon will follow in the church fellowship hall. In lieu of flowers, friends and family may designate memorial gift donations towards the music and worship ministry at First Baptist Church Alameda.

Shortly after coming home from an extended hospital stay, Rafael Mojica Calixto, 88, was ushered into his heavenly home on January 6, 2020. His personal faith in Jesus Christ as his Savior and Lord and his devotion to his family supported him... View Obituary & Service Information

The family of Rafael Calixto created this Life Tributes page to make it easy to share your memories.

Shortly after coming home from an extended hospital stay, Rafael...

Send flowers to the Calixto family.