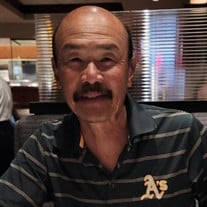 Patrick “Pat” Tinloy June 17, 1948 - March 8, 2022 Patrick “Pat” Tinloy was a caring father, grandfather, brother, uncle, nephew, cousin, and friend. He was born in Oakland on June 17, 1948 to Edward and Marion Tinloy. After graduating from Skyline High School, he received his Bachelors and teaching credential from San Francisco State University. For the next 35 years, he was a passionate and committed teacher, first at King Estates Jr. High, then Bret Harte Jr. High, and later at Oakland High School. In his retirement, Pat loved spending time with his family and friends, which he often did at baseball games, while hiking, traveling, at the movies, or over coffee or a shared meal. Pat is survived by his son and daughter-in-law, Casey and Holly Tinloy; daughter and son-in-law, Marissa and Daniel Eisengart; grandchildren, Grant and Willa Eisengart; brother and sister-in-law, Douglas and Elena Tinloy; nephews and nieces, Scott and Nelly Tinloy, Bradford and Jennifer Tinloy, and Jeffrey and Iris Tinloy; and grand-nephews and nieces, Jack, Audrey, Samuel, Olivia, Alexandra, Daniel, and Elizabeth Tinloy; great aunts and uncles Chalice Fong, Bertha Wen, Bernadine and Edwin Wong, Armonita Yuen, and Lucille Yuen; and many dear and close friends. Family and friends are invited to attend a memorial service on Friday, April 1, 2022 at 11:00 am at Chapel of the Chimes at 4499 Piedmont Avenue, Oakland, CA 94611. The family is requesting that everyone please wear masks. In lieu of flowers, the family requests donations to the American Heart Association or American Diabetes Association, in memory of Patrick Tinloy.

The family of Patrick D. Tinloy created this Life Tributes page to make it easy to share your memories.

Send flowers to the Tinloy family.