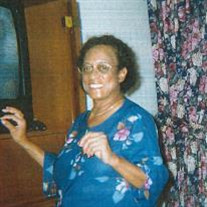 Patricia Ann Holloway went home to be with the Lord on December 31, 2021. Pat was the oldest of three children, Lillian V. Mckenzie (deceased) and Bettye J. Lonon (deceased). She had one surviving brother in-law, Robert E. Lonon, Sr. On October 14, 1931, Patricia Ann Wyles, affectionately known as Pat, was born to John Albert Wyles and Virginia Blackwell-Wyles in Portsmouth, VA. She lived in Portsmouth until the age of 23 at which time she wed Wilburst Reed Holloway (Hollie), a member of the U.S, Navy. They were married for eight years. Years later, Patricia met Chuck Walker, a well-known jazz musician. Patricia and Chuck shared an endearing bond for 30 years that was revered by all. The couple relished in one another’s company and partook in frequent vacations to multiple U.S. destinations to include musical events where Chuck was the headliner. Patricia chose a 25-year career in the medical field as a Licensed Practical Nurse. She was well-regarded for her work ethics at Summit Hospital in Oakland, CA. Performing arduous duties of a Sterile Processing Technician, she worked directly with surgeons to properly sterilize and assemble operating instruments for surgical procedures. Additionally, she prepared and delivered surgical carts to operating rooms for specific operations. If times got hard or the opportunity arose, Patricia comingled multiple shifts at Summit and other hospitals to sustain her financial independence. Patricia was steadfastly devoted to her church, Pastor and (his) wife. She treasured fellowshipping with church families and doing for others. Her fortes were making floral arrangements for celebratory events and preparing the communion table with trays of bread and wine for monthly worship, both of which she delighted in. Patricia was highly regarded in Avon (a multinational cosmetic, skin care, fragrance and personal care company) for many years. Her dedication mirrored that of a ‘soldier’ - developing and grooming teams of representatives who sold Avon products under her guidance. She received countless awards for her enthusiasm and sales volume. In her later years, she elected to participate in a food program under the direction of Mrs. Audrey Golden-Rutledge, lovingly referred to as ‘Ms. Audrey’. Patricia graciously accepted every task – setting up tables, monitoring food distribution and mentored women who worked for Ms. Audrey. This endeavor meant much to her for she took pride in feeding the needy and valued the cause. Patricia did not go unnoticed. She was an impeccably well-dressed woman who was witty, charming, graceful and loving. A woman who feared and cherished the Lord, Patricia was raised a Christian and was biblically astute. She quietly left an earthly room and transitioned to another to be with the Lord. She leaves to cherish her memory 10 nieces and nephews, a host of great nieces and nephews, one God-daughter, friends and church family. May we be comforted in knowing that she has journeyed to a heavenly eternity. The family wishes to convey our heartfelt appreciation and sincere thanks for your words of encouragement and prayers, not to exclude other acts of kindness. May God bless you abundantly.

The family of Patricia Ann Holloway created this Life Tributes page to make it easy to share your memories.

Patricia Ann Holloway went home to be with the Lord on December...

Send flowers to the Holloway family.