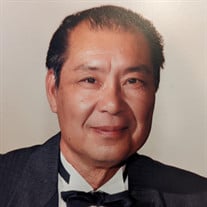 Noble Ning Gee Born March 3, 1930 in Toisan China, passed peacefully on Wednesday, January 12 in Oakland. Having immigrated to the US through Angel Island, Noble worked in the laundry business before joining AC Transit in 1965 and retiring in 1993. Being a bus driver meant always being on time. You can be late, but never arrive early at the stops because passengers would miss the bus. His pet peeve about timeliness carried on in every family event we went to. Always on-time! If you ever rode the 42, 11 or 12 bus, odds are, he would have been your driver. A great driver who achieved 28 years of safe driving. Noble was proud to be a Chinese American and wanted his family to become American through experiences such as family trips to Disneyland, Santa Cruz, San Diego, picking fruit in Brentwood, digging for clams in Point Richmond, visiting friends in Clear Lake, collecting water snails in Tracy, and watching James Bond movies. Watching Westerns with John Wayne was another favorite pastime along with regularly playing mahjong with friends in San Francisco as well as hosting friends at the house with a homemade dinner followed by more mahjong! Keno was another favorite game on the occasional trips to Reno and Tahoe. For many years, every Sunday was a family trip to San Francisco Chinatown to grocery shop and see kung fu movies with his son Harvey while mom was getting her hair done. Noble was a great cook who prepared the family meals everyday despite getting up during the week at 5am to get to his bus route. His after work routine would be to go to Chinatown, occasionaly stop at Smith’s department store where the clerks knew him by name, watch cartoons with the kids, and then whip up a traditional Cantonese dinner. Oyster beef, steamed whole fish, green onion and ginger crab, tomato beef, holiday prime rib, and beef stew were some of our favorites. Noble was an Oaklander through and through. He followed the Oakland A’s and Raider games on a small transistor radio that sat on the kitchen counter. It was because of this that his children learned the games as well. He didn’t hold back on sharing his opinions about players and coaches with his family and especially son-in-law Joseph. HIghlights include his first Raider game sitting in the Black Hole as well as attending an A’s playoff game. Noble, along with his wife, shared trips to Yosemite, the Grand Canyon, Canada, New York, and most special was the trip back to the village. He was extremely generous and hospitable. Noble never asked for anything and he would give you the clothes off his back if you needed it. Noble was predeceased by his parents Gee Yun We and Yee Yuke Bo He is survived by his wife Constance, daughter Inverleith (Joseph), and son Harvey (Leelind), and son Humphrey (Daisy deceased) from a prior marriage. Grandchildren include Rose (Tyler), Lauren (Sean), Brandon, Evan, Devyn, Kyle, and Kaelyn. A memorial service will be held on Friday, January 21 at 12:00pm at Chapel of the Chimes, 4499 Piedmont Avenue, Oakland, CA. Current COVID regulations will be enforced; masks required inside.

Noble Ning Gee Born March 3, 1930 in Toisan China, passed peacefully on Wednesday, January 12 in Oakland. Having immigrated to the US through Angel Island, Noble worked in the laundry business before joining AC Transit in 1965 and retiring... View Obituary & Service Information

The family of Noble Gee created this Life Tributes page to make it easy to share your memories.

Send flowers to the Gee family.