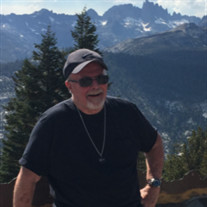 Michael (“Mike”) L. Sorey died peacefully in his home at Pacifica Senior Living in Oakland, California, on Saturday, October 2, 2021. Mike is survived by his two sons, Mick Sorey of San Carlos and Ken Sorey of Oakland, grandsons Casey and Jake Dunning-Sorey of Oakland, granddaughter Brandy Boulos of Fremont, brother Robert Sorey of New Mexico, ex-wife Judy Sorey of Oakland, and daughters-in-law Ashley Dunning of Oakland and Kristie Bartsch of San Carlos. Mike, known in his grandparent years as “GMike,” loved family gatherings with delicious food, where he shared his love of music, geothermal science, baseball, and good humor with all. Mike was born in Rapid City, South Dakota, and he moved with his mother and brother throughout the United States until they settled in Tucson, Arizona when he was in upper grade school. Mike received his Bachelor’s and then a Master’s Degree in Water Resources from the University of Arizona in 1966. He began his career with the United States Geological Survey in Denver, Colorado in 1967. He moved with Judy, Mick and Ken to Berkeley in 1972 to complete his PhD in Hydrology from the University of California, Berkeley, in 1974. Mike continued his career with the USGS in Menlo Park, with a two-year opportunity to participate in an exchange with New Zealand’s Geological Survey to do Geothermal Research, 1977-1979. Mike retired from the USGS in 2001. Mike took great pride in his work in Mammoth, California, studying and publishing reports about geothermal science. “GMike the Volcano Pro” taught classes on geology at the College of Marin, and performed guitar and ukulele, and sang, in numerous venues. Most recently, he shared his musical appreciation and talents with residents at Pacifica, bringing smiles to the faces of his numerous friends there. In a memoir GMike wrote for his grandchildren several years ago, he commented on the importance to him of his grandkids and that “being an active part of their lives will always mean the world to me!” Mike’s family and friends will celebrate his life at a private ceremony in Oakland.

The family of Michael Sorey created this Life Tributes page to make it easy to share your memories.

Send flowers to the Sorey family.