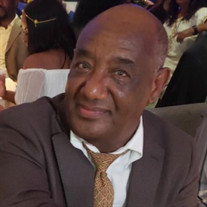 In Loving Memory of Mengesha Wondaferow April 5, 1942, to December 4, 2020 Ato Mengesha Wondaferow was born April 5, 1942, to Woizero Berhane Mekonen Endalkachew his mother, and Kijazmgne Wondaferow Awarerious (his father) in Selale, Ethiopia. Because his father was a prominent regional governor of Alamat, in the northern region of Ethiopia, Mengesha lived as a child with his mother in Selale, Ethiopia, and later in Addis Ababa as a teenager. He attended Akaki Mission Boys Elementary and Secondary School and then Menelik High School. After graduating high school in 1966 he immigrated to the United States for higher education and attended San Francisco State University graduating with a degree in Cultural Anthropology. While in the United States he trained and taught American Peace Corp volunteers who were preparing to travel to Africa and those who were assigned to Ethiopia, he taught Ethiopian culture, language, and customs. Mengesha Wondaferow was married to his college sweetheart and the love of his life Sandra Henderson on August 30, 1969. They remained inseparable until her death in 2017. They were the proud parents of two children Yayne Abeba Wondaferow (which means the flower of my eyes) and Atikum Wondaferow. They were also the proud grandparents of Kaya and baby Sandra. His love and dedication to his wife Sandra during their marriage, her illness, and her passing is a blueprint for a Hallmark movie. We know his loss of Sandra was too much for his heart to bear. Mengesha Wondaferow worked for the State Bar of California as the coordinator of the legal ethics compliance training office until his retirement. He was a kind and generous man, with an infectious smile and a man who did not forget where he came from. He was active in his Ethiopian community and church. He was loved and respected by his community and is remembered for his smile and his ability to treat everyone he has met like an old friend. Even though he embraced theWestern culture, values, and ways of living for years in the United States, he remains culturally traditional in his dealings with people as if he's never left his homeland. Mengesha was often called the Senior Diplomat. He was a great communicator, often paraphrasing to let you know he understood you and that your feelings and opinions mattered. You felt important, and that you possessed exceptional qualities. When visiting his home it felt like a long-awaited event one looked forward to. His genuine smile and engaging conversations would often last for hours. His Graffeo coffee he served was the best! Mengesha Wondaferow loved to play golf, go hiking and looked forward to his monthly trips to Napa Valley. Everyone who's ever met him will profoundly miss him. Mengesha Wondaferow passed away on December 4, 2020, at his home in Oakland, California. Mengesha has joined his wife Sandra, his brothers Tessema Mekonen and Yenesu Shiferaw. He is survived by his daughter Yayne Abeba Wondaferow, his son Atikum Wondaferow; and his granddaughters Kaya and baby Sandra. He is also survived by his older sister Kongit Alemu and younger brother Agonafer Shiferaw as well as his brother Aklilu Wondaferow and sisters Aster Wondaferow and Rosa Wondaferow who reside in Canada.

The family of Mengesha Wondaferow created this Life Tributes page to make it easy to share your memories.

In Loving Memory of Mengesha Wondaferow

Send flowers to the Wondaferow family.