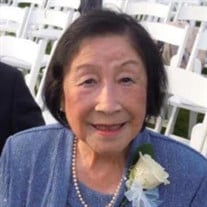 On May 28, 1923, Charles Hang Quen married Yung Keng Woo in Duluth Minnesota. Mary Hang Quen was born April 10, 1926 joining brothers George and Paul. The Quens moved to the San Francisco Bay Area in 1927 where siblings, Mabel, Eugene and Marie were born. Mary attended Clawson Elementary School, Prescott Junior High School and Oakland Technical High School where the social butterfly met the quietly studious Stanley Leon Chinn. After returning from WWII, Mary and Stan hit the nightclubs and were married on October 11, 1947 at St. Paul’s Episcopal Church on Lake Merritt in Oakland. Daughter Christine Jennifer arrived in 1950 and son Martin Kent in 1952. By 1957 the family had moved to Hayward. Mary tolerated housework, but what she enjoyed was the suburban life with an army of gal pals. Weekends were spent with the Quen and Chinn clans. In 1965 Mary’s family of four moved to Oakland and purchased the Hansen’s house at 3837 Brighton Avenue. Chris left for the dorms at UCSF in 1970 and Martin stayed at home until 1979. As empty nesters, Mary and Stan flew to Hawaii and Disney World in Florida. But Stan was US Air Force ground support for the Flying Tigers and had enough of airplanes, so Mary toured the Far East and Europe with friends and relatives without Stan. She loved to travel and play mahjong with her gal pals. Chris would marry Harvey Quan and Mary became a devoted grandmother to their twins Lauren and Greg in 1984. Martin would marry Clarice Young and Mary would enjoy her third grandchild Jeremy in 1988. Mary soldiered through numerous health issues, a stroke, congestive heart failure, high blood pressure, high blood sugar and Parkinson’s. Eventually depression and anxiety prompted her to get help for her mental health. At 89 personality changes signaled the onset of dementia. Her many years as a housewife were over and the long goodbye had begun. Before Stanley would pass away on December 3, 2019, Mary laid next to him and said “Don’t leave me.” Mary passed away peacefully in her sleep on August 22, 2021 at the age of 95. Joining the many loved ones that have passed before her. Mary has a lot of catching up to do. Mary is survived by brother Gene, sister Marie and their families, her children Christine and husband Harvey Quan, Martin and wife Clarice Young, grandchildren Lauren and husband Shyam Jayaraman, Gregory and wife Connie, Jeremy and wife Angelina and great grandchildren Zoey, Meera and Zion. Mary’s achievements are the loved one she leaves behind and the pleasure and love she gave to her host of friends. We gather today to mourn her loss, but if you were to tell her that, she might say with a grin “Are you kidding? What loss?”

The family of Mary Quen Chinn created this Life Tributes page to make it easy to share your memories.

Send flowers to the Chinn family.