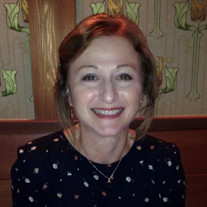 Marisa Ajdelman, 56, of Alameda, California and Mar Del Plata, Argentina, passed away July 2, 2021. She was born in Mar Del Plata, Argentina on March 19, 1965. Marisa graduated from New York University, where she earned a Bachelor of Arts in Film and Television. She was married to Robert Levy on August 21, 2005. She is survived by her 15 year old son Joshua, who Marisa cherished, her husband, Robert, her sister Laura, her brother Ariel, her nieces Abi and Dafi, her nephew Shalom, and her mother Flora. Marisa had a storied career in marketing to Latin countries, working for varied companies, including the National Basketball Association, Direct TV, Wells Fargo Bank, Blue Shield, and most recently for Abbott Laboratories. Before getting ill, Marisa was actively involved with her local temple, Temple Israel. She had many passions including for her son Joshua, and most recently for championing the fight in the United States against stomach cancer. Marisa was an extraordinary human being who was loved by many, many people. When Marisa walked into a room, her presence was immediately known. Anything Marisa did, she did with great passion. She was the ultimate warrior who was incapable of accepting failure or no. After getting sick, Marisa battled in unprecedented fashion to beat stomach cancer so she could extend her time with Joshua, and not just for herself, but for anyone inflicted with stomach cancer. Marisa relentlessly fought for her life and the life of others similarly inflicted. She mentored many stomach cancer patients. She was actively involved with multiple organizations that raised money for stomach cancer research, she attended and spoke at Department of Justice symposiums advocating to raise federal funds to fight stomach cancer research and regularly attended and spoke at gastric cancer conferences to meet the right doctors and to pressure the industry to do more. To view Marissa's funeral service please use this Zoom link and enter your email address when prompted. https://www.econdolence.com/join-viewneral?jc=10000:saKBEjMQarpRn863KOfWxqJcYAVC/W5k:7OubcUaZUiqN5kAI/h/ZyA==:yJozZN0SeQWE8s8saDtYjQ== In lieu of flowers, the family has requested donations to: https://debbiesdream.org/

The family of Marisa Ajdelman created this Life Tributes page to make it easy to share your memories.

Send flowers to the Ajdelman family.